Chelmsford Cathedral and the Quaker embroidery 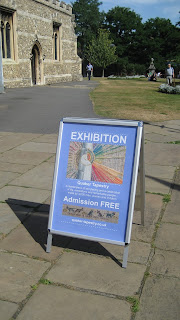 First begun in 1981, and taking 15 years to complete, the Quaker Tapestry (a set of embroidered panels), tells the story not only of the Quaker faith but many important aspects of western history. Several of these panels are now on display at Chelmsford Cathedral, in Essex. 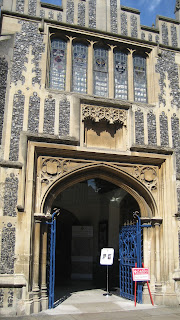 The embroidery was the idea of Anne Wynn-Wilson (1926-1998) and inspired by the Bayeux Tapestry (also an embroidery), but instead of one continuous strip of fabric this work is made up of 77 individual panels.  It apparently took 4000 individuals to complete this mammoth task - some of them people who had never embroidered before. 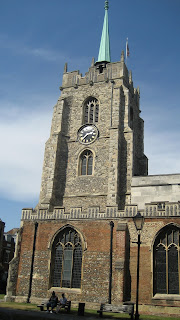 Many Quaker businesses are well known in British Society - Barclay and Cadbury are perhaps two of the most famous.  The Quakers are well known for their involvement with the anti-slavery campaigns of the eighteenth century and as conscientious objectors during WWII, when many of their members took on non-combative roles assisting with medical units.  There are many other aspects of Quaker life you can learn about through the work.

One of my favourite Quakers is Elizabeth Fry (1780-1845) who was not only an abolitionist but a friend of the poor and the prisoner.  One of her schemes to help women convicts was to create schools inside jails where she would encourage women to read the Bible and sew, rather than play cards, fight or beg.  She created the British Ladies Society for the Reformation of Female Prisoners (in 1821) which not only collected donations of sewing equipment and materials for women convicts but encouraged women to aid and assist those of their own sex encouraging reformation as well as empathy.

The Quaker Tapestry is in Chelmsford until 3 September 2016, Monday to Saturday 10am to 4pm.  Admission is free but they have a lovely  shop of books, cards and kits which if purchased supports their exhibitions.  Otherwise the work can be seen at its permanent home at the Quaker Tapestry Museum in Kendal, Cumbria.  Visit the Chelmsford Cathedral on a Wednesday and there is the added bonus of a very nice cafe with home made cakes and scones.
Posted by Janette at 00:33