An afternoon of silk with tea 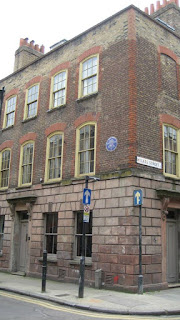 Anna Maria Garthwaite was a designer of woven silk in the eighteenth century who, unusually for a woman of that time, not only ran a successful business, but was famous for her design skills during her own lifetime.  Over eight hundred of her watercolours form part of the Victoria and Albert Museum collection and there are examples of silk fabrics made to her designs in museums around the world.  She was born in 1688, the daughter of the Rev Garthwaite and his wife, in Grantham, Lincolnshire.  She had at least one sister, Mary, who was widowed twice.   Anna Maria went to live with Mary in York in the 1720s, before they relocated to Spitalfields a few years later.  Their house, suitably adorned with a blue plaque, still survives in Princelet Street, Spitalfields, London. Occasionally the house is open to visitors.  I do not know if Mary assisted in the business, but I imagine it was likely.  Anna Maria lived until 1763, (until she was 75), and seems to have remained single. 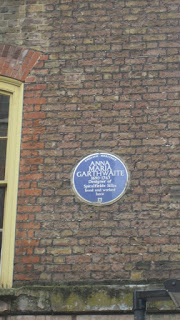 Anna Maria's designs reflected the 18th century love of flowers and plants, partly explained by the interests of natural philosophers (scientists) of that time.  It was her skill in painting flowers in a naturalistic style that made them so appealing. Flower painting was one of the few subjects open to women artists and I know of two others famous for their botanical paintings who lived about the same time.  One was Maria Sibylla Merian (1647-1717) - some of her botanical prints are currently on display at an exhibition on gardens at the Queen's Gallery.  The other was Elizabeth Blackwell (1707-1758) whose drawings were published as  "The Curious Herbal".  What also connects these three women is that they all lived relatively independent lives, both socially and economically and it seems a shame they are not better known.

Anna Maria was not only artistically gifted but technically skilled.  One of her great innovations was the design of point papers, known as Garthwaite papers, that assisted in the transfer of a painted design to something that could be woven.  They also suggest she knew how to weave.

This was just one of the fascinating insights I learnt when I went to a talk at the Warner Textile Archive in Braintree, Essex last Saturday. The afternoon started with Mary Schoeser, textile historian and President of the Textile Society, who talked about the Spitalfields silk industry and its links with Warners and Braintree.  As I have silk weaving ancestors it also gave me an insight into my own family history.  After the talk we were shown treasures from the archive by archivist, Kate Wigley. Both Kate and Mary were very generous with their knowledge and we had discussions on a range of connected topics throughout the day.   The day finished with a beautiful tea laid on by the archive staff.  It was a day very well organised by the team at Braintree.

The Warner Textile Archive exhibition area is normally open Wednesdays and the first Saturday of each month, and they have a regularly changing exhibition programme.  Researchers and groups can arrange visits and talks and I would highly recommend it as a place to visit.  They also run regular workshops so it is worth signing up for the newsletter.