London's burning - but the embroidery was saved! 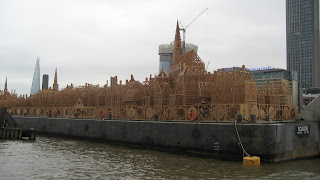 This week is the 350th anniversary of the Great Fire of London.  The Museum of London is staging an exhibition Fire! Fire! as part of the commemorations which tells the story not only of the fire itself but its aftermath.  It has objects (such as a batch of hooks and eyes) destroyed in the blaze, as well as letters witnessing the event, and newspaper accounts.  There are images to show how the fire spread but also plans as to how London could be rebuilt. I was interested in it from an historical point of view but what I had not expected to see were two pieces of embroidery. 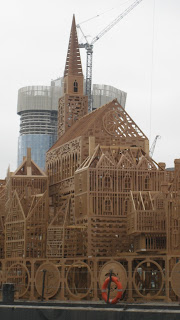 One was an unfinished piece of needlework.  Legend had it that it was rescued from a house in Cheapside, before it succumbed to the flames.  It was suggested that it may then have been forgotten about and this was the reason for it remaining incomplete.  It is just as likely that its maker found a more interesting project - I do not think there are many embroiderers to this day without a few UFOs (unfinished projects) stashed away, waiting to be completed when the time seems right. 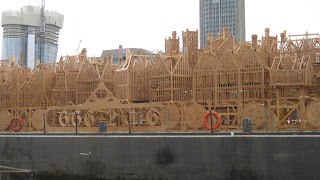 The second piece of textile in the exhibition was a set of bed curtains - also supposedly rescued from the fire. 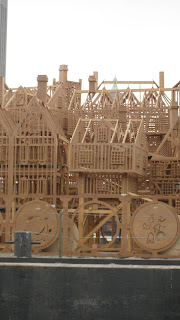 Until this week I had not realised how was being done to commemorate this momentous event. Artists were inspired by the fire within weeks and months of its devastation (many of their paintings were on display at the museum), and so it seems appropriate that public art and spectacular entertainment is used to remember the events today.

The fire itself is a dramatic narrative for a painting but the contemporary art works also remind us that the end of the fire was not the end of the tragedy.  The refugee camps we see on the news today are a reminder of the terrible tragedy that befalls the survivors of a disaster.  The official numbers of those who died in the 1666 fire are small, but it is estimated that many more lost their lives during the terrible winter afterwards living as they were in makeshift shelters.

It is perhaps not surprising that many of the contemporary artworks and commemorations also involve fire.  Outside Tate Modern there will be a Fire Garden, and at the Guildhall there will be a Fire Food Market.  The roof of St Paul's will have a fire projected on its dome, and the National Theatre will have another modern art work on its walls.  Three routes of breezeblock dominoes will thread through the city on Saturday (3rd September) a symbolic and physical link between now and then.  There are other works that remind us that the Great Fire is just one of many disasters that have struck communities in all corners of the globe - Of all the People in the World is at Inner Temple Hall, using rice to symbolise the volumes of people fleeing war and disaster and Holoscenes at Exchange Square, Broadgate that reminds us that water is as dangerous as water. 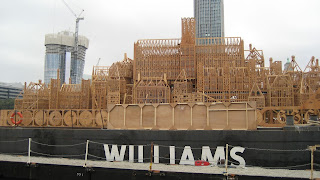 However, perhaps the most dramatic event will be London 1666.  A model of London's 1666 skyline will be set ablaze on Sunday evening.  Before its destruction the model itself is worthy of being admired as a piece of community art. 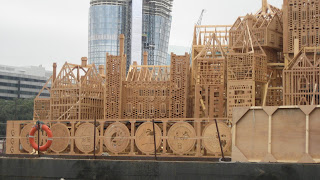 The sculpture (images of which are shown here) is currently moored on the Thames between Blackfriars and Waterloo bridges, designed by David Best but created by hundreds of schoolchildren and young people from inner London.  If you cannot get to London to view it set on fire, it can be watched online. 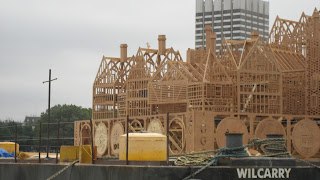