Bound for the library 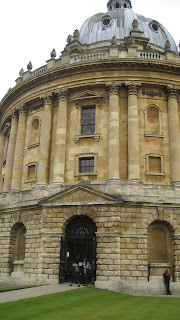 If I had to choose a theme for the week, it would be "books and libraries", not just because I am in the middle of reading and researching an essay for my art history studies, but also because by the end of this week I will have visited four different libraries.

At the beginning of the week, visiting friends, we found ourselves amongst the Bodleian Libraries in Oxford (the first library dates from 1320).  Although we could not go inside the Radcliffe Camera (pictured above - built 1749) we did have a conversation as to why it was called a "camera".  I have since discovered there is a scholarly reason as the word means "room" in Latin so appropriate for a reading room for scholars.  We could however visit the newest Weston Library, only opened in 2015.  As many modern libraries do, it has a coffee shop and an exhibition space.  As well as an interesting exhibition on Shakespeare (Shakespeare's Dead - continues until 18 September 2016), there is a selection of Bodleian Treasurers, including a beautifully bound embroidered bible.  Known as The Geneva Bible it was once given as a gift to Elizabeth I as a new year gift in 1583-4.

My second library this week is my own local library - I think the fact that it is also the local school library means that it is safe from council cuts.  Sadly it is not large enough to allow for much browsing as each section is rather limited.  However I love the fact I can order books on line and then pick them up to borrow.  I have used their free Ancestry access in the past too - a very useful resource.

Today I visited Chelmsford Library (see below), where my local Embroiderer's Guild branch is holding it's anniversary exhibition Stitch by Stitch.  It was a good chance to catch up with members past and present and we had visitors from Scotland and Prague.  There are some really stunning pieces of work including some amazing stumpwork - but also felting, beading, patchwork. I was a bit late delivering my work so it is up, but missing its label.  I was just happy I was able to support the exhibition.  The exhibition is open at the library until the end of May. 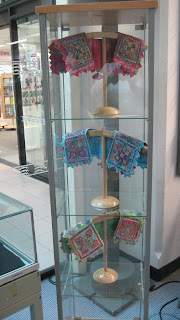 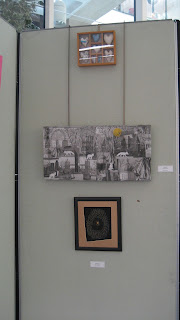 Tomorrow I am booked to my fourth library of the week - the British Library.  A meeting at lunch time in town means I can spend the morning with books already ordered for my OU research.  Although I won't have time to visit tomorrow, it too has a "treasurers" section that is free to visit at any time (and a cafe), as well as its paid exhibition area.  Of course most books involve some stitch  in the binding (apart from modern glued bindings and some rolled books).  Much old paper also comes from rags so might be considered textile too.

So despite a week with my head in books, it could be said that it has been quite a textile related week too.
Posted by Janette at 13:42