A moment of reflection 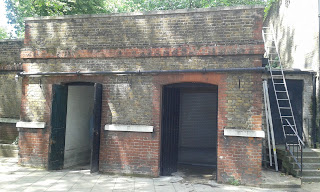 Whatever form art takes, it always includes time for thinking.  Textile artists are always asked "how long did that take?" but rarely does anyone ask "how much thinking did you do to get that result?" Sadly stitching is often admired for dexterity and patience before intellectual content.

Conceptual and installation art is very much about thinking - and last Saturday I discovered a work that was particularly powerful in that respect.  The work Skylights is an installation piece by Ken Wilder, set in an old Victorian building of the remains of the London Foundling Hospital.  Two pyramidal roof lights have been set into the ceilings and are set to be at their best at noon or with the evening sun, when the light reflects straight down on to the pool of water below visually doubling the space.  Unable to visit at noon I was still able to watch the light reflect off the water as well as the remains of the glass tiled walls.  The walls had been painted, but the artist has removed what paint he could to reveal their original texture.

Although offered a chance to splash in the water, a return to work after a lunch break meant I had to decline.  However, the artist himself was happy to walk through the pool making the surface ripple and the reflections shimmer. 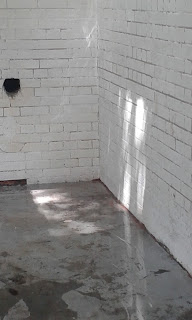 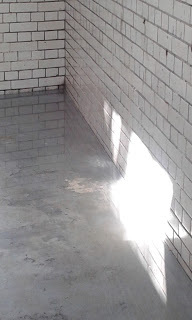 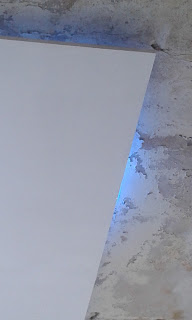 The blue light coming from one of the ceiling pieces looked like neon light but was in fact the effect of light shining through the tarpaulin covering the room.

As beautiful as the light and reflections were, there was another important reflection for this work. which related to its previous use - the building was originally the children's mortuaries.  I knew the boys and girls had been separated in life (until well into the 20th century) but had not realised that they had also been separated in death.  The building is due for demolition but the installation has meant it has been fully documented.  It will be replaced by the new Queen Elizabeth II Centre allowing Coram to help more disadvantaged children and families.  This work seemed a fitting tribute to the unknown lives who would have rested here with no family to mourn their passing.


So although not a very textile focused blog it does emphasise an aspect of textile art often forgotten, at a time when reflection and remembrance are particularly important as tomorrow's centenary commemorations highlight.
Posted by Janette at 06:13