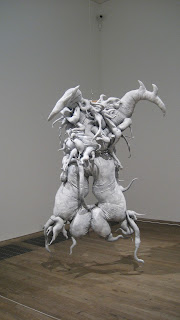 For me, one of the joys of contemporary art is when something I have seen a dozen or so times, and taken no real interest in, later becomes something quite intriguing.  This is what happened when I went to Tate Modern this week and joined one of their free tours in the "Making Traces" gallery.  The first work we viewed was this piece by Lee Bul, called Untitled (Cravings White).

It is not an original piece in the sense that it is a 2011 reconstruction of a work lost in a studio flood. The original was created in 1988.  The artist made other similar pieces in red and black.  It is made of textile, stuffed with more textiles.  It is not just a sculpture - it is a costume.

Lee Bull (b. 1964) is a Korean artist who wore this costume on several occasions both in Korea and in Japan.  Our Tate guide said she wore it in the streets but also in front of shrines.  It is therefore a remnant of performance art

It looks organic - like a root, but its colouring also makes it look like stone.  As a costume it makes the wearer look like a monster and this, we were told represents a "transgression of boundaries and a fascination with the uncanny".  It is reminiscent of myths and legends, but also reflects the artist's interest in the creatures of Hieronymus Bosch.

As a costume worn by a female artist, it could also be seen as making a comment on gender issues.   There are also political interpretations.  What sort of woman would wear such a bizarre outfit in 1980s Korea?

It seems this fabric, organic, stone like, monster costume has many angles to explore relating to politics, performance, mythology, the natural world and gender.  I am not sure I will be able to walk past it again without seeing it in a completely new light.