Wandering along the Wandle 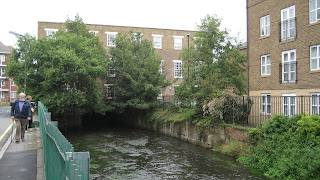 The River Wandle in the south of London is in an area of the capital I had not visited until this week. The river's fast flowing nature made it an ideal place for siting water mills at the beginning of the industrial revolution and for this reason a link with the creation of textiles.  The industrial heritage of the river was the subject of a guided walk arranged by the Friends of Coram, a group set up to support the Coram charity.  I knew the area also had a link to the original Foundling Hospital, set up by Thomas Coram, but a bit of history beyond the scope of the walk.

Originally the site of a priory, Merton is now the site of a huge Sainsbury/Marks and Spencer store, but our guide, Stephen Benton, showed us the last remnant of the priory wall (below) hidden behind a petrol station. 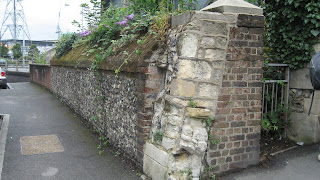 The arch below was another section of the wall, though having been accidentally knocked down (I think in the twentieth century) it is not authentically medieval but a restored section - part ancient and part modern. 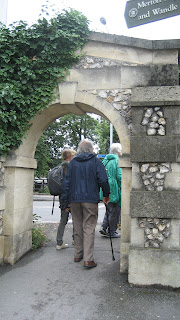 In an area now known as Merton Abbey Mills, until the dissolution of the monasteries by Henry VIII, there had been a priory.  The site was never an abbey but once named, the title stayed. It was here that William Morris set up arts and crafts (Morris & Co) workshops in the 1880s.  Fabrics were woven, printed and dyed - alongside other crafts such as stained glass making. 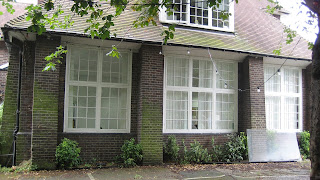 This was also the location where Edmund Littler produced printed silks and fine fabrics for Liberty. The building above, known as the Show House, (built in 1912), was the design house for Liberty fabrics. 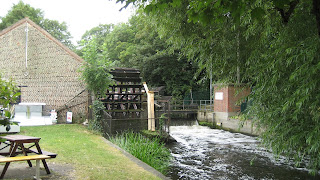 Here (above) a waterwheel, perhaps once used in textile production, and is now used by a pottery. 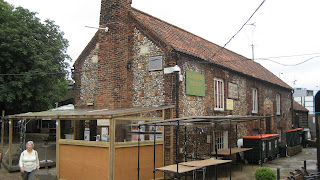 The building above is the Colour House.  Its flint construction suggests it could be medieval, at least in part.  It was the dye house for Liberty and now the home of a miniature theatre (since 1995). 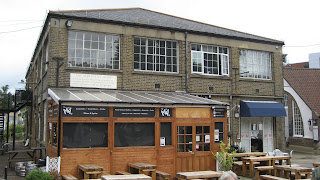 Many of the buildings have now been turned into restaurants and shops and this (above) was the Apprentice Shop.  Built in the 1920s by Liberty, it was an area to train apprentices.  Left derelict, it was completely restored in the 1980s. 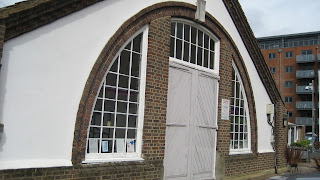 This (above) is the Long Shop - originally used for pressing silk flat, and once heated by furnaces.  It dates from 1906. 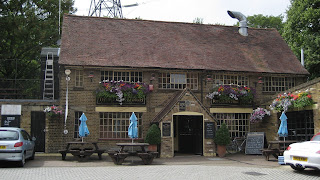 This last building is called the "William Morris" and a public house - its age and original use are not known - perhaps it has always been a pub.

After walking through the "abbey" site we travelled further along the river, eventually ending at Morden Hall Park, with mills that produced snuff, not fabric.  This was where our walk finished.  Had we gone a little further we would have reached Ravensbury, once the site of John Arbuthnot's Bleaching and Calico Printing Work where in 1760 thirteen girls from the Foundling Hospital were apprenticed.  Instead there was just time to visit the National Trust cafe before taking the journey home.