In Utopia even the quilts sing! 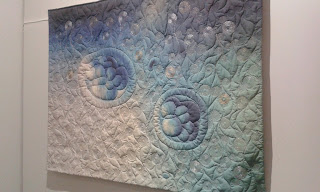 In London last week, my friend and I decided that with just an hour or two spare after lunch we wanted to visit an exhibition that might not be too large and was on route for our journey home.  I suggested an exhibition at Somerset House, specifically because I had read it included an e-textile, ie a textile with an electronic element.  I was intrigued to see how such a piece would work - would the electronics be gimmicky or actually add something to the piece of work?

The exhibition itself was an initiative of King's College London.  It was called Paths to Utopia and includes not only exhibitions but events, discussions and installations.  It has been running since July, continues until October 2016 and is a collaboration with Somerset House and the Courtauld Institute. All these activities come under the title of Utopia 2016.  The events and displays are responses to the 500th anniversary of Thomas More's Utopia, a copy of which is currently on display in the British Library in the Treasurers of the British Library gallery (until 18 September 2016).  Some of the display pieces have and will change, but the textile work will remain for the duration.

Thomas More created the word "utopia" to mean "no place" or "no where", rather than the modern interpretation which suggests a perfect world.  The British Library page suggests that More was asking whether a perfect world was possible, whether this was merely a hypothetical question (ie, not something that could actually be created) and what would be the purpose of considering a perfect world that could never exist?  These are deep, difficult questions so it is not surprising that most of the Paths to Utopia exhibition itself is deep and difficult too.  It is best to go in with an open mind not expecting to understand the logic of how it connects to Thomas More's Utopia, but hopefully by learning more about the topic in general it will all become much clearer.  Some of the exhibits had been specifically created to make you consider what your personal Utopia might be.  It is unlikely to be the same as anyone else and perhaps the reason why it cannot exist.

All the things you are not yet was created by Karina Thompson, an artist based in Birmingham.  It combines traditional craft skills with 21st century technology.  The image itself shows two embryos - taken during IVF treatment and later became the artist's nephews.  When the original image was taken this outcome was not certain.  The piece is quilted with silver spirals - suggesting movement but also using an ancient symbol often associated with birth and rebirth.  The viewer is invited to touch the quilt and if you do you will hear two boys singing Twinkle, twinkle, little star, which itself is about a rhyme that considers the miracles in the world around us.    This is a textile where "do not touch" does not apply - you need to touch to experience it properly. 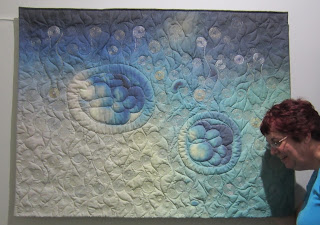 If you are interested in e-textiles, this work is worth a visit.  There is a recording of a discussion that relates to the work on YouTube.   The artist is in discussion with Dr Matthew Howard, Lecturer at the Centre for Robotics Research, (the collaborator who helped with the technical aspects), and Neil Denny from Little Atoms. The interview starts at about three minutes in and talks about how the work was created, the technological problems and how they were overcome, plus other ideas about how textiles and technology can work together and why this work relates to the idea of Utopia.

The quilt is beautifully made and the technological element adds to its beauty as well as its meaning.   Everything was well considered throughout the design.  It made me think about other applications for textiles and technology, but also about collaborations across different fields - ie science and art.

All the things you are not yet is on display as part of Paths to Utopia at the Inigo Rooms, King's College London, Somerset House East Wing, Strand, WC2R 2LS until 2 October 2016.  The exhibition is free.