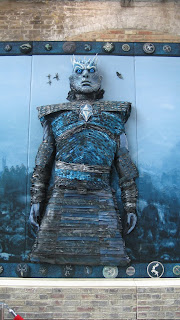 A: When it is an embroidery

How often is a large scale embroidery given the title "tapestry" despite the fact that they are techniques as different as ceramics and glasswork, metalwork and carpentry, being a plumber or an electrician?  Apparently the original brief for the Hardhome Embroidery (see above) was to create a "tapestry" like the Bayeux Tapestry (which is an embroidery).  I purchased a book on the Bayeux Tapestry later on the day I saw this exhibition*.  Although I am still reading, it suggests it is probably down to some (male) antiquarians who were interested in all types of things but usually with little expertise.  Now it seems almost any large scale textile works is given the title of tapestry, and many despair. 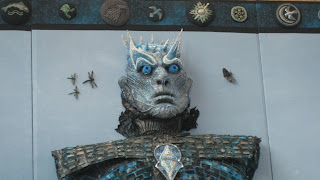 This particular embroidery was the creation of members of the Embroiderer's Guild, the Royal School of Needlework, Hand & Lock and Fine Cell, under the direction of Embroiderer's Guild Creative Director, Anthea Godfrey.   It is a combination of hand and machine stitching, applique, beadwork, metal thread work, quilting, and digital printing.  One press report highlighted the fact it was made by pensioners and prisoners but it was also made by students and people of working age too - men and women.  How many hours it took to stitch was another questioned asked, but as any embroiderer (or other craftsman/woman knows) we rarely count.  Also does anyone consider how long it takes to plan and organise, etc, etc?  Did anyone ask Picasso or Van Gogh how long they took to paint something - I think not. 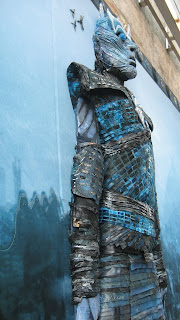 Luckily I had already planned to visit London on one of the days it went on display at Central St Martin's, near King's Cross in London.  It is hoped that it will travel over the coming weeks and months.  The Embroiderer's Guild website should have details when available. 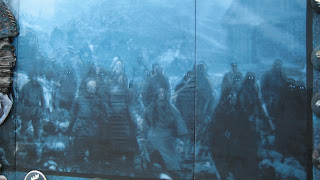 I have never watched Game of Thrones, where the character of the White Walker, (the central image of the piece), comes from but seeing this did tempt me to seek it out.  I am told that some of the costumes have some fantastic embroidery too. 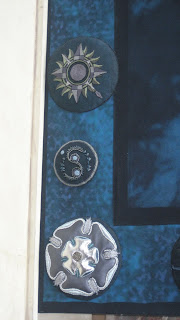 The edge of the embroidery has a border of family crests (see above) - emblems of allegiance and kinship.  I think most (if not all) of these were made by individual Embroiderer's Guild members. 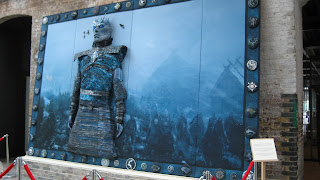 An impressive work, in a short time scale - an achievement in terms of creativity, technical skill and a logistical challenge.  A chance to show that embroidery is a cutting edge art and at the same time built on traditional techniques.

Look out for it if it comes your way.

*"The Bayeux Tapestry: The Life Story of a Masterpiece" by Carola Hicks (2007), Vintage Books