Have you ever been to an exhibition where you thought you had seen everything only to find, on talking to someone else, you missed something interesting? If only there was enough time (or funds) to visit exhibitions several times over.

Over the summer I have been volunteering at the Foundling Museum in London on a regular basis and one of my jobs was stewarding in the galleries. Answering visitors' questions is one way of seeing objects from another person's viewpoint. Stewarding also means seeing the displays and exhibitions repeatedly over several weeks.  Temporary exhibitions are another way of "revisiting" objects you thought you knew.


One of the current exhibitions at the Foundling Museum is 26 Pairs of Eyes.  Twenty six writers were invited to look at twenty six objects and create a response using 62 words (a sestude).  The items they wrote about were not chosen by the individuals themselves, but "pulled out of a hat".  The writers had no control over what they had to write about.

One of the items chosen was a textile one - a foundling boy's uniform. 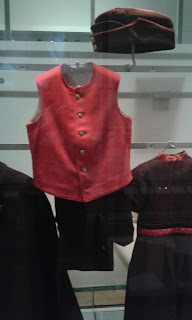 It is part of the permanent display, that also includes one of the girl's outfits - both uniforms hardly changed from designs (allegedly by William Hogarth) of the 18th century and continued to be used in the 19th and 20th centuries. 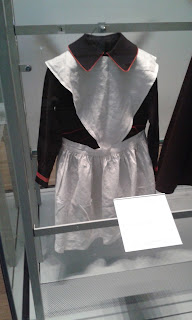 The sestudes are spread throughout the museum, and printed on yellow card making them relatively easy to find - though there is an element of a "treasure hunt" in finding them all.  When you find one you have to stop and look at the object, looking to see what the writer saw.  What did the writer notice that I had missed?

There are plenty of questions that might come to mind when looking at the uniforms.  Who might have worn them?   Who made them?  Who decided when you needed a new one?  Were they warm in winter; too hot in summer?  Were they scratchy or soft?  How did the children feel all dressed the same?

The sestudes allow you an insight into what the writers noticed and the 26 Pairs of Eyes blog gives an extra back story to their thinking.  Maeve O'Sullivan, who was picked to write about the boy's uniform, was initially fascinated by the buttons of the boy's uniform.  This led her on a thread of thinking to other ideas about childhood and identity both in the past and present.  She thought about the hospital and how it gave the children who came there a better chance than those who coped with poverty.  She thought about how the children themselves thought of their lives and how we live ours.

Just one object led to all these thoughts.

26 Pairs of Eyes continues at the Foundling Museum until 25 October 2015.