Weaving a narrative - a portrait of every-woman (or man)? 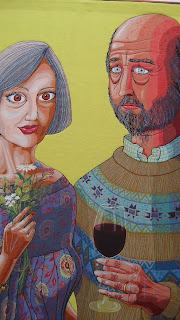 When I knew I was visiting the Summer Exhibition at the Royal Academy in London last weekend, there was one work I knew I wanted to see - Grayson's Perry's Julie and Rob tapestry.  Last summer I was lucky enough to spend quite a bit of time at the Foundling Museum when the exhibition Progress was on, which included Perry's The Vanity of Small Differences (2012).  That set of tapestries followed the progress of Tim Rakewell, in a parody of William Hogarth's Tom Rakewell (Rakes Progress) - both "rag to riches" stories, that end with the protagonist having a rather untimely death. They were both portraits of a fictional life with a moral tale and both contemporary of their time.

At the time of Progress, I had spent the previous year studying Exploring Art and Visual Culture (A226) with the Open University.  It was the perfect timing to understand the art history references and symbolism that Perry includes in his contemporary narratives.  What I particularly noticed about Perry's work is that although you can enjoy it on a simple level with its bold images and contemporary references, there are always symbols and layers of meaning to discover - some humorous, some thought provoking.

This Summer Exhibition piece is part of a body of work that tells the story of the fictional Julie Cope. Part "shrine", part holiday home, Perry had been commissioned to design a house, now built in Wrabness in Essex, and this is perhaps the most well known part of his homage to the "every-women" in Essex.   Despite being a native of Essex myself, "Julie" is not a character I fully identify with, but perhaps that is the point - there is no typical "Essex woman" (or man).  Anyway can a portrait ever tell the whole story of someone?

Julie's identity bracelet did resonate as I had a similar bracelet when I was in my teens/twenties - did my charms say something about me then?  I also wondered about the flowers - did they symbolise some personal aspect of Julie or her life?  What about the tear welling up in Rob's eye - what did that imply? The fictional Julie died, (as symbolised by the pizza delivery bike that is part of the display in the Wrabness house), but unless this Rob had some foreknowledge of her demise surely this image was supposed to be a portrayal of a couple in happier days.  Is he raising his glass or drowning his sorrows?

Julie and Rob also reminded me of another of Perry's exhibitions which had as its main theme identity through portraiture (personal, regional, national) - the Who Are You? exhibition, which I visited in February this year at the National Portrait Gallery, London.  Not only did it examine a whole range of British identities (mainly in the medium of textiles or ceramics) but the work also questioned how we view different individuals and groups - by their appearance, by their gender, by their disability, by their religion, their lifestyle or home town. Can anyone really be identified by these things and does our identity change in different circumstances depending on who we are with and where we are at the time?

I have found all these explorations of identity fascinating and Perry's work always challenges my thinking - opening my eyes to lives I might not have thought about before.  I think one of Perry's greatest skills is how he communicates his ideas - using contemporary themes and media we are all familiar with (ceramics and textiles, and often an accompanying TV show), his work is certainly accessible to every-woman and every-man.  And perhaps that it why his work appeals to so many - you certainly do not need to understand art history to enjoy his work, but it does give another layer of meaning.