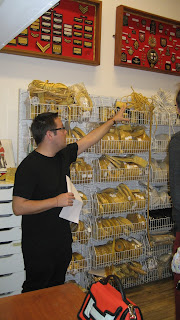 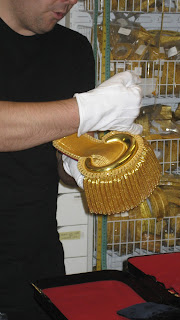 This week I went on a visit to the atelier, Hand & Lock.  Like Dr Who's tardis, the building itself seemed much bigger on the inside than it appeared on the outside (mainly because of the scope of work created within its walls) and we were constantly shifting between the past and the future. We were also given an insight into the secret side of embroidery, which is the 007 component of this blog title.

We were shown around by their excellent Communications Manager, Robert who started with a brief history of the company from its early beginnings as the shop of Mr Hand, who specialised in military work, and who was later joined with Mr Lock, whose specialisation was in fashion. The company now designs and creates work as varied as monogrammed shirts, military badges, items for royalty, pieces for West End Shows as well as unique pieces for artists and the world of haute couture. 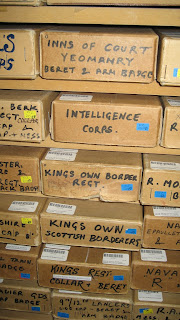 The whole building was bursting to the seams (excuse the pun) with badges and insignia (mainly military) kept ready for dispatch, along with braids and other supplies any self-respecting general or peer of the realm might require. One of their star items is a set of body guard's epaulettes almost ready for the next coronation - they just require the addition of the appropriate insignia which cannot be designed until the next sovereign is known.  It was an interesting reminder of how such occasions have to be planned even though the full preparations might not be needed for decades.

As well as the traditional pieces that Hand & Lock are involved a large part of their output is very contemporary including bespoke embroidery for fashion runway shows - London Fashion Week is one of their busiest times. Skill is obviously important but secrecy is also of the essence. Sometimes the company itself does not know where their designs are going to be used - it can be years later when they spot something and find out its true destination.

For me one of the highlights of the tour was learning about the development of a design.  Usually starting with pencil and paper, although computers can also be used in designing or, attached to the appropriate machine, stitching.  All the designs start as an annotated drawing marked with techniques required, colour and the direction of stitch etc. In order to explain one of the ways designs are transferred to fabric, we were given a demonstration of a traditional technique - prick and pounce.  A simple leaf design was used to show the development from sketch to a stunning sampler of techniques in gold work and silk shading. 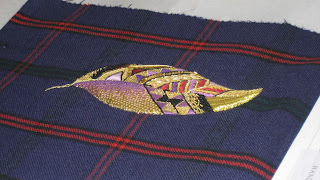 Head Designer, Scott then explained a little more about the techniques of gold work.  He also showed how looking at the back of a piece of work is the best way of understanding how it was created. This cuff was used to demonstrate a range of techniques including elements at different heights and different materials to create contrasts in the design. 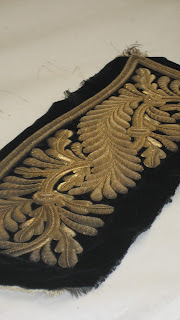 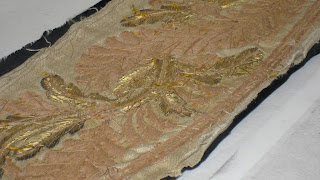 Not surprisingly one of the most rewarding aspects of Scott's job is seeing something drawn on paper appearing in the news or in the fashion press.  One such example was a piece of work used in the chair on the royal barge (Gloriana) as part of the Diamond Jubilee celebrations.

This led on to learning how traditional techniques can also be used in contemporary art and fashion. Individual pieces currently in production have to be kept secret but one recent work we could look at was a piece commissioned for the artist Samantha Roddick who commissioned embroidered work for inclusion in her photographic work - "Hidden Within", an exploration of the objectification of women.

We completed the day with a mention of their workshops and their annual competition that encourages expertise in hand embroidery.  The competition provides a platform to display the range of talent and skill of individual artists.  Another way of promoting contemporary embroidery is in their use of a window display to showcase textile art and something worth looking out for if you are in the area of Margaret Street, London.
Posted by Janette at 09:43