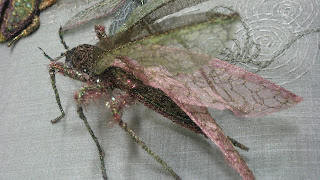 Last weekend the Eastern Region of the Embroiderer's Guild held their annual meeting and this year it was the turn of Hertfordshire to run the day.  We had two speakers, plenty of retail therapy, exhibitions, competitions and demonstrations.  I was particularly interested to see an exhibition of work inspired by Hertfordshire archives - why I didn't take any photos I don't know. 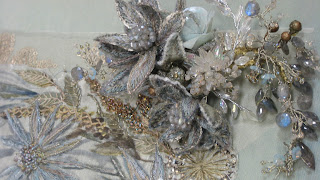 Our first speaker was Diane Springall, who talked about working to commission - its pitfalls and pleasures, but for me the highlight of the day was the second speaker, Michele Carragher who works in the TV and film industry.  One of her main areas of work is embroidering the costumes for HBO television's Game of Thrones series. As well as an insight into working in this pressured industry, it was interesting to hear how the characters were represented by their costumes, and that the embroidery was part of this. 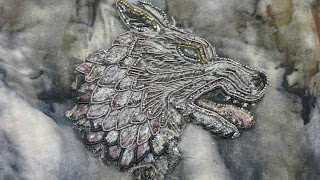 Another element of this work was the use of insignia for each of the families - a sort of coat of arms that reflected kinship and ancestry.  Michele very kindly brought some examples of her work for us to scrutinise afterwards and it is worth checking her website for more information and some beautiful images.

It was also lovely to catch up with other members - some of whom I only meet at events such as these, though some it was just a passing "hello".  I even managed to submit a piece of work into the competition, and though it did not win a prize I was pleased I had been a part of the display.