I have never been a frequent flyer, and to be honest it is for me the least favourite part of any foreign holiday, but I know it is a pretty safe way to travel in a modern, well tested and reasonably comfortable plane.

It is therefore with great admiration that I met someone last weekend who wants to fly in a plane made mainly of fabric and wood (not including the engine, obviously), in a machine I was told while relatively easy to get to into the air, is quite dangerous to land.  There is no also way of keeping out the wind and rain, apart from a thick coat and goggles. 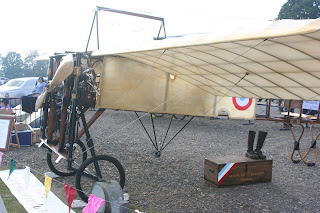 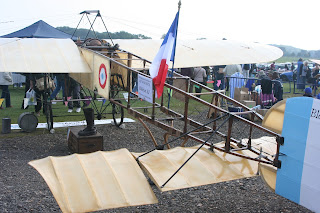 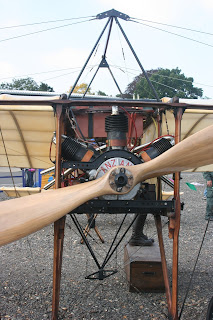 The plane itself is a replica of one previously flown over 100 years ago - a Bleriot XI, and it was brought to the Shuttleworth Uncovered airshow this month, to sit alongside an original that is the oldest piece in the Shuttleworth Collection at Old Warden in Bedfordshire.

The plane is a fascinating project by a group called the Club Aero des Garrigues from the small French town of Saint Hippolyte-du-Fort.  This town was once celebrated for its three day airshows, known as "Les Batailles".

It was not the only plane made from fabric and stitch at Shuttleworth, several of which flew during the display including some replica Edwardian planes.  Perhaps the most famous fabric plane, that flew was the Hurricane, known for its role in the Battle of Britain which was also commemorated this year. 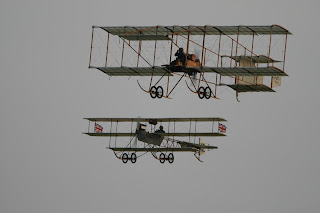 Apparently the aero club hope their replica Bleriot XI will fly next year, although the pilot told me he had to stay off the gateaux to make that possible, as he too needs to be as light as possible.

But perhaps his dependence on fabric and stitch is still not as daring (or indeed terrifying) as one of the acts that used to part of the original Batailles show.  Apparently the audience were sometimes entertained by a Madame Pelletier whose parachute (a prototype of ones used today), was too bulky to fit in the cockpit of her husband's plane, so Madame Pelletier would launch herself from the wing instead.  Certainly a world away from the highly trained professionals the Red Devils who entertained us at Shuttleworth. 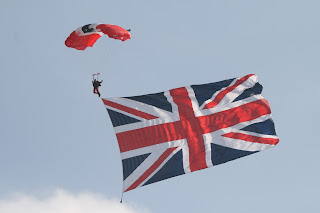