One of the reasons I wanted to see Barbara Hepworth: Sculpture for a Modern World exhibition at Tate Britain, was because the website stated it included some of her "rarely seen textiles" alongside sculptures and other artworks.  I have to say the textile component of the exhibition was limited and I cannot now remember much about them.  Luckily I was not disappointed with the sculpture that was the "main event".  I think the textiles were just to show that like many artists, Hepworth worked in a variety of mediums partly to try out new ideas, but perhaps also because it was commercially viable.

What the exhibition did highlight to me, was that Hepworth's sculptures do share something in common with textiles - the tactile nature of her work.  As anyone who has ever visited a textile art or embroidery exhibition knows it is the desire to touch that is the most difficult to control and much of Hepworth's work has the same effect.

I have read a few reviews complaining that the works were in perspex - to be honest I am not sure how the Tate would have managed to control everyone coming in and stroking the work if they hadn't.  For me I think this "untouchability" adds to the appeal - something you would like to touch but you can't. I know Hepworth herself wanted people to be able to touch and it is one of the reasons much of her work is in public spaces.  For this exhibition, I quite liked the experience of knowing you can only imagine the smoothness of the wood, the coolness of the stone, etc.

There was another "textile" element to the work - the threads (or strings) that appear in some of her sculptures - like huge stitches, as if they are pulling the pieces of work together and creating a tension. They reminded me of strings on a musical instrument - would they make a sound if you could touch them?  Within the major exhibition there was the normal "no photography" rule, but luckily a piece from the permanent collection was on display, and also had these strings. 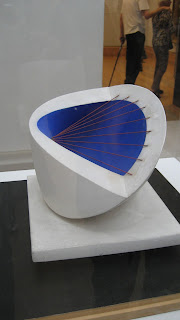 It seems galleries generally have been thinking about the idea of whether seeing painted artworks is enough for visitors. There seems a particular interest in exploring how to engage all the senses with art primarily created to be visual. Earlier in the year I visited (and blogged about) the Soundscape exhibition at the National Gallery but now Tate Britain has its own Sensorium, which had not opened when I went to the Hepworth show.  Unfortunately the nature of this show means that it is not an exhibition you can guarantee entry, but I am intrigued to know if eating a chocolate or smelling a scent and at the same time looking at a specific artwork will alter the experience.

Is it just a gimmick or will the scientific data the collaborators are collecting tell us something new about art as they hope it will? The Tate website also provides a list of other works which, in the traditional sense refer to the senses, but leave it to the viewer to imagine the sound, taste, smell or texture.  There are many historic artworks where the five senses are alluded to, not always obvious to someone who has not studied art history so perhaps these novel approaches are just what are needed to make people look more closely and more importantly think about the work on display.


Soundscape at the National Gallery has now closed.
Barbara Hepworth: Sculpture for a Modern World continues at Tate Britain until 25 October 2015 (see website for admission fees, etc).
Tate Sensorium is on until 20 September 2015 - free but entry restricted, tickets available on arrival at 10am and 2pm.