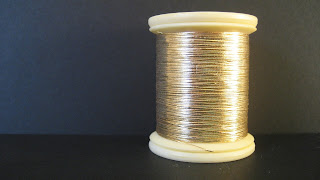 When Howard Carter first peered into Tutankhamun's tomb and asked if he could see anything, he is said to have replied, "Yes, Wonderful things".  I was reminded of these words when I visited Alice Anderson's exhibition at the Wellcome Collection - Memory Movement Memory Objects.

The exhibition is about the act of preserving objects.  The performance and meditative effect of the wrapping process is as important as the objects themselves. The background music added to this effect. The exhibition opens with an opportunity to try some wrapping, including assisting in the wrapping of a car - a full size one - in thread.

It is as you step into the second gallery, that you are bedazzled by the "wonderful things",  In a darkened room, objects stand on plinths, and at the back a staircase - everything wrapped in shimmering, copper thread.  As you walk around the room you are surrounded by objects on these black plinths - so it is only the objects you really see. Yet these were not precious things they were ordinary everyday objects - an electrical plug, a telephone, keys, tools, a Coca Cola bottle, a TV, a record player.  Some were difficult to make out at first but ultimately it was the fun of sudden recognition combined with seeing things differently. Everything was beautifully lit and that added to the drama. Even though it was going nowhere, the staircase pulled you forward with the desire to climb its glittering path.

In a room with combined objects my first instinct was to work out what was inside - before stepping back to consider them as something new.  Another room was filled with a length of rope or pipe, hung from the ceiling - twisting and turning.  It was like being in a mystical forest - though without the trees.  Then there were collections of objects, laid out on shelves or framed - tiny things like coins, some perhaps simply chosen for their shape.  In the last section there were objects distorted with the wrapping - including a canoe, a wheelbarrow and a set of shelves.

This is one of those exhibitions that has to be experienced - images do not do it justice.  Even if it is hard to grasp why anyone would want to wrap ordinary things it is worth seeing how the wrapping makes things more beautiful.  In a way it is a bit like looking onto a familiar landscape unexpectedly covered in snow - the familiar is seen in a different light.

The exhibition continues at the Wellcome Collection, Euston Road until 18 October 2015.  It is free to visit.
Posted by Janette at 07:16