Power of Stitch at Braintree Museum 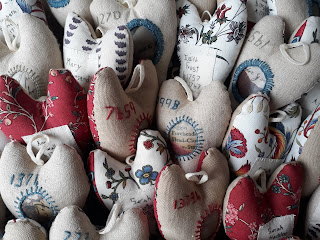 E.A.S.T's latest exhibition, Power of Stitch, is now open at Braintree District Musuem (until Saturday 29 June 2019).  My own contribution is a body of work called 'A chain of events' which refers to three stories related to the technique of tambour work - a chain stitch made with a hook rather than a needle.

I became interested in the history of tambour embroidery when I discovered a number of girls at the eighteenth century Foundling Hospital being apprenticed to embroiderers from the mid-1760s.  The embroidery masters (they were mostly male) were also sometimes identified as tambour workers.  When I tried to learn more about the technique's history in Britain all I found was that it arrived in England in the mid-1760s.  Prior to that it has a long history in China and India where it has been used for centuries.

Looking through newspaper archives from the eighteenth century the first person I found who advertised tambour work (then called broder au tambour) was a Mme Catherine Pignerolle.  The newspapers, from February 1765, include several advertisements by Mme Pignerolle teaching skills and selling items worked using this particular technique.  There were others teaching and selling tambour needles, but Mme Pignerolle seemed to be one of the most regular in the press.  When she died in 1773 it took three days to sell all her possessions.  I wondered did tambour work make her rich?  Her story is represented by this piece of work. 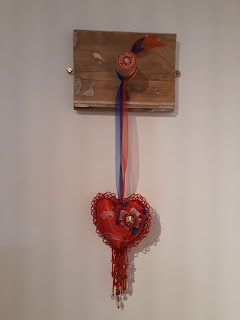 To represent 30 foundling girls (and one boy) who were apprenticed to the same embroiderer I created 30 hearts.  Each one has the name of one of the children, their number (all foundling children also had a number), the year they were admitted/born and the year they were apprenticed.  One side of each heart has a little 'window' showing a foundling token - identifying notes, objects and fabrics.  On the other side I used cottons that are reproductions of 18th century textiles.  These fabrics had been a gift from a friend.  I wanted to use these because these girls, unlike many of the foundlings, might have been supported by this friendship network. 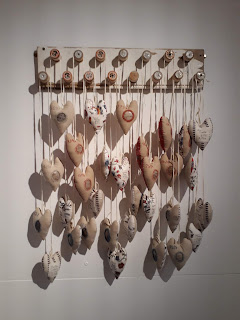 My last piece of work relates to another tambour related story from the newspapers.  That of Frances Glover and Elizabeth Wheeler who, aged 20, were found in the New River, London in 1780.  The report states that they were unable to find work (as tambourers) and it was thought this might have been the reason why they threw themselves in the river.  By now this date there were increasingly stories of tambour workers being sweated in workhouses - demand was high and competition meant selling cheap.  Did tambour work make them poor?  These girls are remembered in my third piece of work. 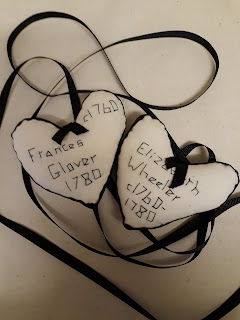 As well as tambour embroidery, one of the other main themes of this work has been the representation of time.  It is one of the reasons I have used photographic images - as a means to capture time.

To find out more about the other artists whose work is on display visit the E.A.S.T website - HERE.