Sewing in the Summer

On the very last weekend of the Summer Exhibition at the Royal Academy, I managed to catch the show.  It is an exhibition that can sometimes be overwhelming - just because of the number of pieces on display all vying for attention.  It is impossible to take in everything.  I went this year with friends and was glad I did.

One of the first pieces we saw as we entered the Central Hall was Blood of Sweat by El Anatsui Hon RA - a large work of "stitched" aluminium, using copper wire.  I love the way that this artist creates his soft, shimmering textile-like works.  Aesthetically intriguing you are drawn in to find bits and pieces of discarded metal and wire.  If there was time to look properly, there would be a much deeper message than an object of beauty made from detritus. 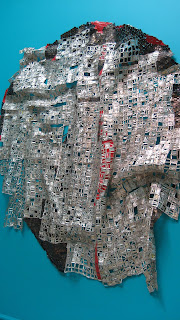 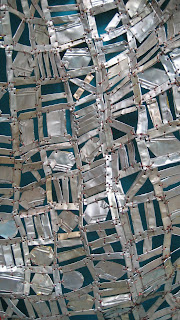 The exhibition is always a combination of serious work alongside images that make you smile.  One section of wall contained work by celebrity artists Harry Hill (the image of Damien Hirst) and Una Stubbs (Grayson and Measles) both below an image of a smiling Simon Cowell (by Jean Samtula). However the image that particularly appealed to me here was that of Smuggler by Kate Barlow - the budgerigar in the top left corner.  I liked the simplicity of the design, and had not realised initially that it was hand embroidered.  Kate is a student of the Royal School of Needlework, and I was glad I picked it out first for its design, before then being wowed by the silk shading technique.  According to the RSN website it took 140 hours to complete.  It was good to see a traditional embroidery considered an artwork by the Royal Academy. 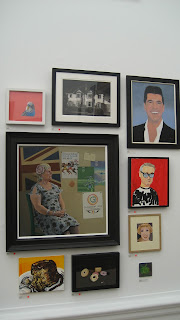 There were other textiles on display, including a machine embroidered piece (so high up I could not see any detail), a tapestry by Grayson Perry, a cilice (hair shirt) literally made of the artist's hair and a sculptural piece that came out from the wall (One-to-One by Lisa Milroy RA) that used hand printed fabric.

Nice as it was to see some textiles, there were many other works I found interesting.  One I particularly liked was a work by Sir Anish Kapoor RA Untitled - unfortunately the photograph does not do this piece justice. 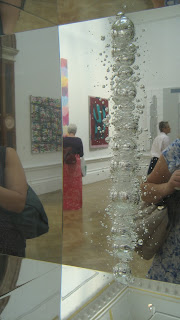 There were several paintings, prints. architectural designs, sculptures and other works that I enjoyed. I think the trick with the RA Summer Exhibition is not to try and take in too much, but to wander slowly looking for pieces that catch your attention and then think why.  Even better is if you can go with friends to talk about what you like, what is interesting and what you don't care for.  Sometimes seeing someone else's viewpoint helps change your opinion - which is no bad thing either.