Bags of Treasure, Hope and Friendship 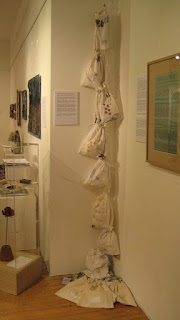 As a change from writing about exhibitions I have visited, I thought today I would write a little bit about my own work that has been part of the E.A.S.T (East Anglian Stitch Textiles) exhibition Between the Lines.  The exhibition, which was launched in 2014, and has at least one further airing in 2016, was a response to the commemoration of WW1.  Not unusually for me, I looked at the role of women during the war.

My research led me to a project I had not heard of previously, that of the Lady Smith-Dorrien Hospital Bag Fund.  Personnel coming into the hospitals and clearing stations were losing their personal belongings as well as their military papers and when Lady Smith-Dorrien (1881-1951) heard about this she created a practical solution by supplying every casualty with a small drawstring bag.

What particularly interested me was the reaction of the men when on receiving a plain calico bag, whilst another received a patterned one.  As the Times reported in 1917, one wounded man grumbled because his companion had a flowered bag, "...a bag with roses on it", but was then placated when he was offered an even more brilliantly coloured one (The Times (Issue 41568), 28 August 1917, p.9).  It made all the difference to have something that not only reminded them of the comfort of home, but was also "cheering after the drabness of khaki everywhere".

It was not just the recipients who enjoyed pattern and colour on the bags - the same report from The Times tells of elderly ladies who could not help themselves but embroider the bags. Individualisation was their way of expressing their shared humanity and in a way sending a message between strangers who although might never meet were joined by a cause to survive and beat the enemy.

During my research I also looked into some of the items that might have been kept in the bags - letters, postcards, bibles, good luck charms, a tiny teddy.  Stuck away from home, cold, frightened, bored for long periods - such things might have been the only bit of joy in what must have been a living hell.

I also looked at two other women whose work helped the war effort - Lena Ashwell and Maud Grieve.  Lena Ashwell (1872-1957) was a British actress and manager who organised companies of actors, singers and entertainers to France.  She wrote how she was pleased to see the enthusiasm ordinary soldiers had for high culture, such as Shakespeare.  Maud Grieve (1858-1951) organised the publishing of pamphlets on the subject of herb cultivation and use - later published as A Modern Herbal.  With pharmaceutical supplies limited both at home and on the front, the lost art of herbal medicine became popular again.

The bags I made were created to the pattern as described in The Times, and each one was made of either plain or part plain/part patterned fabric.  Each of the patterned bags has a piece of Shakespeare that relates to a herb, and this herb is then also embroidered on the bag.  The bags were strung together like a production line when on display, and nestled among them a tiny teddy which I had started to make many years ago, but never finished until now.

Details of Between the Lines next airing in 2016 will be available on the E.A.S.T website in due course.