At home with Captain Harle 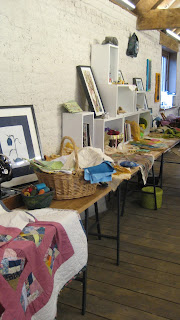 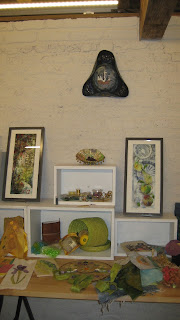 Rainham Hall in Essex, UK is one of the latest National Trust properties to be opened to the public.  I made my first visit there last weekend, not only to visit the hall but to see the work of the 'Material Girls' textile group.  Their work was displayed in the hall itself last year, but some of the work has been developed since then and their open studio event not only could I see the work itself, but also see some of their ideas and development.  Each day one of the artists is on hand to tell you more about their work, so I was also lucky to catch up with my friend Helen.

The Hall itself was built in 1729 for a Captain John Harle, as a family home and although its contents were scattered many years ago, the exterior and interior have survived pretty well.

At present the display in the hall tells the life and times of Captain Harle, although in different seasons the displays will change to tell the lives of other occupants.  At present there are displays on items not just related to Captain Harle's nautical life, but life in the eighteenth century in general, including a recreation of a coffee house in the kitchen area.  A particularly beautiful exhibit is a dress, recreated in a style perhaps not dissimilar to the sort of dress Captain Harle's bride might have worn on her wedding day.

One display is not peculiar to the house's original origins but shows a range of objects found during the conservation process - objects lost and now found beneath the floorboards giving a glimpse into the lives of a whole host of inhabitants.

The Material Girls will hold their open studio until the end of this week (finishes 28 February 2016) and is free to visit (there is a fee to visit the hall).  They are situated above the cafe, but unfortunately there is no disabled access.  In May they have a new exhibition Ingrebourne Valley Visitor Centre in Hornchurch, Essex. 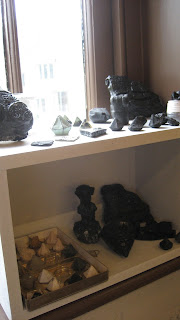