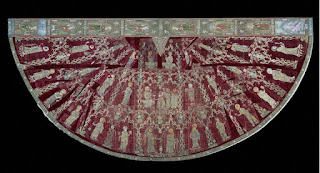 Recently my studies have kept me busy, but I have still managed to visit a few exhibitions.  I thought I would try and catch up and post some information about three that have not much longer to run. The first is the one with the most textiles and that is the one I shall start with.

Opus Anglicanum looks at a type of embroidery that dates to the medieval period.  Such was the expertise in England that all over Europe those who wanted the best came here for quality workmanship.  Sadly the re-using threads and jewels, as well as the dissolution of the monasteries meant that very few survived, and many that do are the ones created for elsewhere.  Because of their fragility it is unlikely some of this work will ever by seen in England again and it really needs to be seen slowly and up close.

This is not a huge exhibition but the work is absolutely exquisite.  My friend and I spent quite some time trying to understand some of the stories they portrayed and I realised that my art history course had not gone to waste!  Quite a lot of the works include the life of the Virgin - not just the story of Mary but that of her mother Anne as well.  The Tree of Jesse also features quite regularly.  The very last piece includes the pall of the Fishmongers Guild - the mermaid is looking at her reflection in the mirror and both are worked in Opus Anglicanum.

The Butler Bowden cope shown above is one of the items on display (image courtesy of Wiki Commons from the V&A).  The Syon Cope is another.  However one of the most beautiful sets of fragments comes from Iceland.

Definitely worth seeing if you have any interest in embroidery, this exhibition at the Victoria and Albert Museum continues until 5 February 2017 - so not long to go.

After a spot of lunch my friend and I then went on to a completely different exhibition at the same museum - You say you want a revolution?  This looked at a very different and much shorter period of history.  It looked at the politics, culture and in particular the fashions and music of the years 1966 to 1970.  Dresses worn by Twiggy, the Beatles (including their Sgt Pepper suits), Jimmi Hendrix and many others are included in this exhibition.  I even spied a jacket made up from a piece of Warner fabric, with a space ship design - a sample of the same fabric has been on display in the Warner Textile Archive.

This is a noisy, busy, frenetic exhibition - especially after the calm of Opus Anglicanum.  You are bombarded with images, ideas, and music.  It showed how this period of time wanted to be one of possibilities - almost Utopian.  But there were negatives too, to some of the ideas of the time.  It was really interesting, thought provoking and sometimes quite challenging.

You Say You Want a Revolution? Records and Rebels - 1966-1970 continues until 26 February 2017 also at the Victoria and Albert Museum.

The last exhibition I mention has only a very small piece of embroidery included and but it does have an interesting history.  It is part of Bedlam at the Wellcome Collection.  This exhibition looks at history and attitudes regarding mental health asylums and is another thought provoking exhibition.   There is also a whole section on art works made by former asylum inmates.

The textile pieces included are two sampler pieces stitched by a Mary Frances Heaton admitted to Wakefield Asylum in 1837 where she lived for 36 years.  Her illness was described as a combination of epilepsy and 'delusions' about an affair she had with Lord Seymour, whose children she had taught music.  She stitched complaining about her confinement to none other than Queen Victoria.   I do not know if Queen Victoria ever saw them or what she thought about them, but they are an intriguing piece of social history.  Unfortunately this exhibition finishes on the 15 January, but it is free to visit so if you are in the area you could just visit to see the stitching - personally I found the whole exhibition quite fascinating.