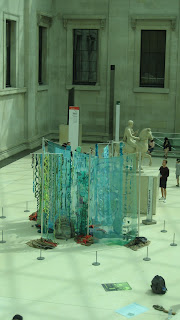 When I visited the British Museum, London, this week to see the Sicily exhibition, I found an added bonus.  Installed in the Great Court is a creative response to their Sunken Cities exhibition.  Sunken Cities: Egypt's Lost Worlds, tells the story of archaeological sites beneath the Mediterranean at the mouth of the Nile where two cities, submerged for over a thousand years are being explored.  In the Great Court, that exhibition was now interpreted in thread and fabric. 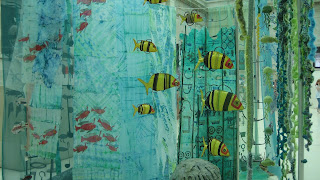 The Sunken Cities exhibition itself includes a large number of objects from huge statues to items of everyday use. Interspersed between the historic items are films and images of the divers face to face with the giant statues now on display.  I visited it a few weeks ago.  Whilst there were many wonders to behold, myself, and the friend I was with, found ourselves losing track of where everything fitted in.  Perhaps it needs a second visit or more likely, I need to read up a little more on Ancient Egyptian history. 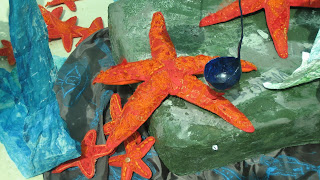 The installation of textile art, Underwater Discoveries, which references both the Egyptian history and also its underwater discovery, is on display until the end of August.  The work is a collaboration between local community groups and artists from the Mary Ward Centre, an adult education college in central London. 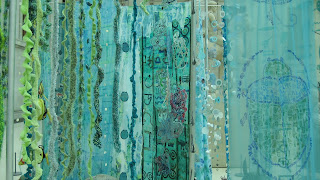 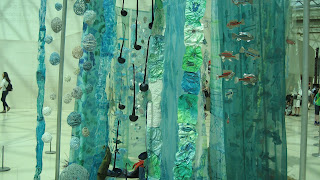 The range of techniques used seem representative of the college itself, which runs classes in a range of subjects including printing, embroidery, and beadwork. 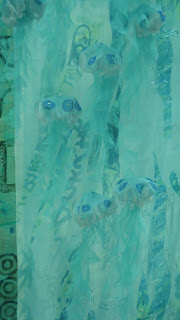 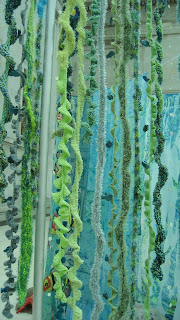 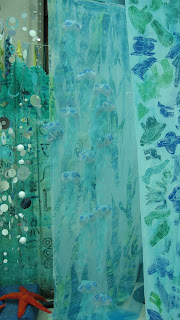 I particularly liked the embroidered star fish (third image from top) but also the jelly fish (above, far right), which are almost translucent against their background - just like real jelly fish often are. 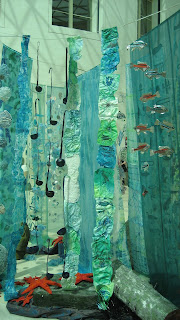 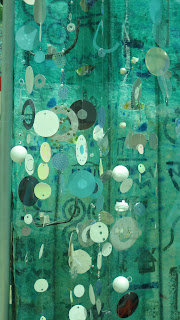 The Sicily exhibition I had gone to visit, was also very interesting.  This display focused on two periods of history, first when the island was invaded by the Greeks (about 734BC) and then when the Normans took over from Arab rule (c.1091).  Both eras created opportunities for cultural exchange.

Of particular interest from the viewpoint of textile history, was the Norman Kingdom of Sicily (1061-1194), created by a dynasty that reigned over a fragile but tolerant society of Jews, Muslims, Orthodox Greeks, Byzantines, Christian Normans and Italians. This was partly due to Roger II's desire to bring scholars of all races and faiths together, which in turn allowed the creation of new types of art and architecture in the building of his Norman Palace of Palermo.

Too fragile to be moved, the coronation cloak of Roger II with gold embroidered silk, pearls, enamel plaques and precious jewels is an example of cultural exchange, represented here by a printed satin replica (made in 1993).  Made within a Byzantine empire the original was embroidered by Muslims in Sicily living under a Christian ruler.  An Arabic inscription around its border includes blessings and statements regarding the virtue of the king.  The main design of the robe is of lions attacking camels, either side of a Tree of Life.  The date tree developed from a Middle Eastern symbol of fertility and immortality, later (through the trade of silk textiles) also became a symbol of resurrection and immortality (ie, a representation of the Christian faith).  The symbolism of the lions triumphing over the camels represents Roger's tolerance of his Muslim subjects, but also his dominance.  This is a robe with very definite political and propaganda messages.

Alongside this cloak replica are fragments of the funerary robe and mitre of Henry VI of Sicily - Islamic gold thread techniques are combined with horizontal repetitions of motifs typical of of North Western Europe.  Unfortunately through the glass they are not easy to see in any detail.