This is not an orange. 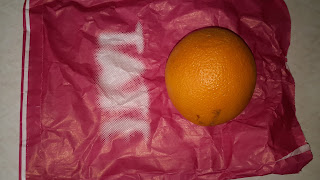 It may look, taste, feel, smell like an orange - but it is in fact a piece of art, and previously on display at Tate Britain.  It is not often that galleries suggest you take a piece of art they have on display home, and when I visited I have to say I did not have the nerve to do so, but my friend did and gave the "art" to me. The exhibition is Conceptual Art in Britain 1964-1979.  For many people conceptual art is quite baffling but really it is about questioning what art is - a question famously asked by Marcel Duchamp when he tried to exhibit Fountain (which everyone thought was just a urinal) - a so called "found object".

So what has this to do with textiles?  Well it reminds me that despite all the decades of discussion, with many now agreeing that something is art if an artist says it is, there are still many who do not include embroidery and textile art as fine art.  Despite this there are plenty of textile pieces, even embroidered ones, in the major modern art galleries.

It did not help that in the 18th century the Royal Academy banned "fancy work" from their exhibitions - but even though there was at least one embroidered piece in last year's Summer Exhibition, most embroiderers are still nervous of submitting their work to this open show.  Now they must love textile art as the Royal Academy has wrapped their building in a fabric installation by artist Yinke Shonibare - a work titled Family Album.  (It is called a tapestry but I think it is more likely to be a printed art work, but I have yet to see it in real life).

Tomorrow sees the opening of a brand new exhibition at the Foundling Museum - called Found. Curated by Cornelia Parker, the list of other participating artists is impressive and I am looking forward to seeing what they have found - and also hearing about the stories behind their work.  I am particularly interested to find out if there are any textiles - watch this space.