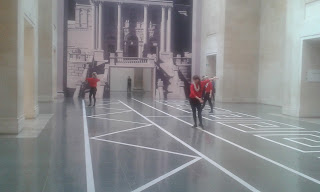 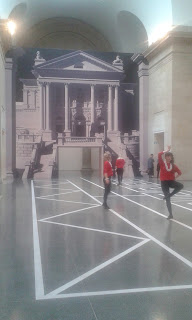 Visiting Tate Britain's library this week I caught Pablo Bronstein's latest commission Historical Dances in an Antique Setting.  Part installation, part performance, it showed that you do not have to have elaborate costumes to create a work of striking elegance.

The dancers movements are based on the idea of sprezzatura, (it means studied carelessness) - something often found in Renaissance and Baroque art.   The facades at either end of the gallery are images of the main facade at Millbank and the Clore facade.  It is all about fragments and falsifying history.

The dancers move continuously between three spaces - sometimes they follow the lines on the floor and sometimes they don't.  Sometimes they post individually and at other times they mirror or work together as a group.  Occasionally one dancer will move and another will replace them.  All of them wore the same costume - red shirt, black tights and enormous beaded jewellery.  The tights mean that you can really see the positioning of their legs but the thing I found most fascinating was their hands - limp wrists, curled fingers, occasionally fluttering movements.

It is hard to explain why but the whole effect I found quite fascinating and mesmerising. 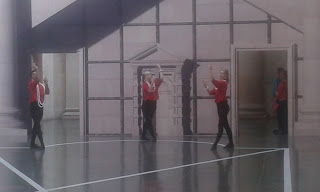