Stunning textiles in pastel and enamel 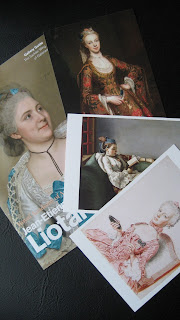 In London, with time on my hands, I decided to visit the Royal Academy's exhibition of the 18th century artist, Jean-Etienne Liotard.  Until technological developments to overcome the difficulty of displaying his favoured medium of pastel were overcome, his work has been difficult to exhibit. It is this medium that gives his pictures a particular luminosity, yet equally it has made him less well known that he should be.


Born in Geneva in 1702, Liotard spent much of his early life travelling across Europe painting for people on their Grand Tours.  John Montagu (4th Earl of Sandwich) and William Ponsonby (Viscount Duncannon) commissioned him to travel and draw souvenirs of their journey to the Levant, in particular the local costumes.  Not only did this display his talent for attention to detail and love of painting textiles it also gave him contacts that later in life helped obtain even more prestigious clients.

Liotard spent four years in the Levant and when he returned to Europe he dressed in an Oriental style. This made him stand out and attract customers, but they were also impressed by his artistic skill. His other eccentricity was that until his marriage he sported a very long beard.  This was removed at his new wife's request.  On her death (in 1782) the beard returned.  He was still painting in old age and, like Rembrandt, he recorded his own changing features in several self-portraits.  Liotard died in 1789.
Although an exhibition of mainly portraits, this exhibition that could be viewed for the costumes alone.  Many of his western clients would wear for costumes purchased abroad, to give themselves an air of exoticism.  He had a particular love of a beautiful blue in which many of his sitters were dressed.

I think what I particularly enjoyed with this exhibition was looking at the difference in images looked from a distance and then close up.  In one painting of Katherine Furnese, Countess of Guilford (1754), a diamond at her throat looked so realistic seen from afar. Close up it seemed to be a brown oval with black and white marks - it was almost magical.

Not only was Liotard skilled with pastel but also talented as a miniaturist working in enamels but both were difficult media.  On the audio guide there was a section that told how until recently it was difficult to transport pastels for exhibition and it is only with new developments in understanding the physical properties of this technique and advances in art transformation that made this exhibition possible.

Liotard drew and painted royalty across Europe including the young Marie-Antoinette, and the British Royal family.  He also painted more ordinary bankers, physicians, actors and singers.  He had no desire to idealise his sitters and the faces are informal and real.  There were so many beautiful images it would be hard to pick just one favourite.

It would also be impossible to finish this review without mentioning his trompe l'oeil, in particular his painting on silk of two plaques and sketches on what appears to be a wooden mount.

This exhibition continues until 31 January 2016, but be warned because the Ai Weiwei exhibition is in its final days (finishes 13 December) there is currently some queueing at the door.  This is partly for bag searches and then ticket purchase.  It was only about 15 minutes when I arrived around lunch time on Wednesday, but by the afternoon the queues were considerably longer.