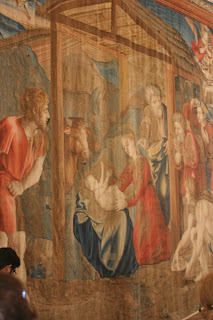 It seems only appropriate to start this week's blog with a scene of the nativity.  It was taken on my recent trip to Rome, to the Vatican.  This was just one of a large number of tapestries in the appropriately named Tapestry Gallery on the way to the Sistine Chapel.

At one time tapestry was the most expensive form of art you could buy - much more prestigious than painting.  Obviously the church wanted to show their power and status so they had several.

Sadly the ones I really wanted to show did not come out at all well in my photographs, but they were pointed out because of what appeared to be quite magical effects.

I would love to know if any other tapestries exist with such magical properties?

In the meantime - wishing all a very Merry Christmas.