A wikiwiki* look back over 800 years

When I booked our visit to the British Library exhibition Magna Carta: Law, Liberty, Legacy, I had not noticed it would coincide with the anniversary of its signing.  The exhibition definitely made it easier to understand Magna Carta a little more, but more importantly why it is thought relevant today. The exhibition explains why the charter was created in the first place but also how it has been used (and mis-used) in the 800 years since.  The exhibition ended with two copies of the charter - one of which had been damaged by fire, but suffered much greater damage at the hands of a 19th century archivist who tried to rescue it.


The illuminated manuscripts on display were some of the highlights of the exhibition, but we were also interested to see some embroidered textile items.  They included the vestments of Archbishop Walter (died 1205) and a fragment of the shroud that was used at the burial of King John (died 1216) - the king who signed the original charter. 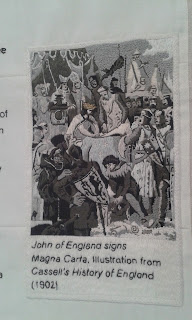 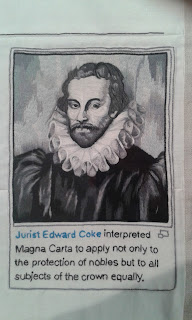 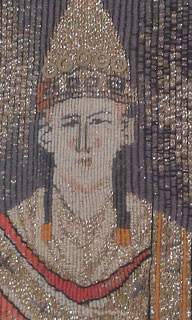 The textile that we had particularly gone to see though was a 21st century one, and outside the main exhibition - Magna Carta (an embroidery) by Cornelia Parker.  I had seen it quickly on a previous visit to the library, but this time had longer to look at it more carefully.  Even though the text, on first glance, looks rather standardised, when examined carefully shows inconsistencies and variations that reflect the individuality of the people who stitched it.  The pictorial elements, embroidered by members of the Embroiderer's Guild, were little masterpieces of their own. 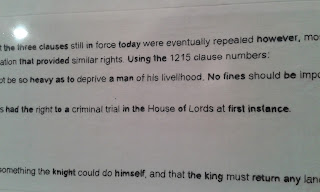 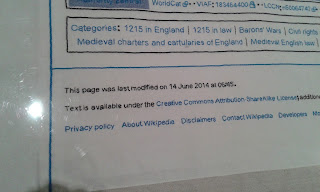 In the evening we were booked for a discussion organised by the British Library, between Cornelia Parker and Jimmy Wales (co-founder of Wikipedia) and led by Roly Keating (British Library Chief Executive).  It was really interesting to hear the thought behind this work, but also to hear about Wikipiedia and its creation - why it is how it is.  At the end of the evening, we were able to buy a book about the project and, as a remembrance of our day, asked Cornelia and Jimmy to autograph it. 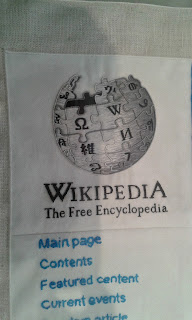 Cornelia Parker's work is on display at the British Library until 24 July and is free to visit - it is  hoped it will tour, but details are still to be finalised.  The Magna Carta exhibition continues until 1 September (see the website for admission charges, etc).