Over the last year or so I have become a regular visitor to Cressing Temple Gardens, in Essex (UK) in particular their Walled Garden.  Created to represent a garden from the Tudor era, it includes knots, a medicinal section, a nosegay garden, a potager and a flowery mead.  One of my favourite sections is the dye garden. 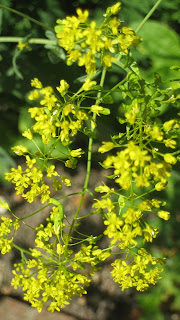 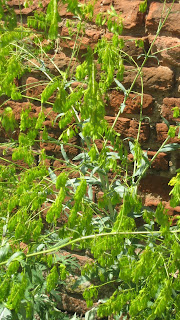 This is the woad plant (isatis tinctoria) as it is currently (June 2015), in the garden at Cressing.  It has a history as a dye plant that goes back to neolithic times, and until the discovery and importation of indigo (indigofera tinctoria) from Asia was the only way of dyeing cloth blue in England for thousands of years.  For many centuries it was also needed for dyeing green - cloth was first dyed blue and then over-dyed with yellow.  It is one of the reasons that early textiles such as tapestries, change so much with age - the yellow dye is not so fast and as it fades, anything that was once green reverts to blue.

By the 16th century, most blue cloth was dyed with imported indigo.  Woad, although still home grown, was used mainly for the fermenting process needed to create a usable dye (see John Edmonds book The History of Woad and the Medieval Woad Vat.)

One of my special interests is the tokens of the 18th century foundling hospital - notes and objects left with infants brought to the hospital, many of which were fabric.  A large number of the pieces of fabric were taken from the children's clothing and many cottons and linens are blue and white stripes and checks.  These simple, rather plain snippets of fabric are not at first sight, the most interesting of the fabrics, but when you realise how many people and hours of work were needed for the creation of every piece of cloth it is a reminder that their use as tokens is only one small part of their story. Not only for the process of dyeing, but time and manpower was also needed for spinning and weaving, which until industrialisation would have been done on home based looms.  Then there was the peril of the sailors who brought indigo from Asia to dye the threads blue, and of course there is the manufacture of the cotton which depended on the despicable slave trade.

So when I looked at this unassuming plant all this came to my mind, and it was just one plant in a whole garden on historical (sometimes textile related) stories.  The garden has a whole host of other dye plants and the garden is free to visit all year around.  The Foundling Museum in Brunswick Square, London is the place to visit to find out more about the tokens.