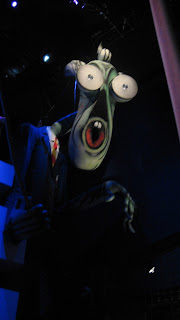 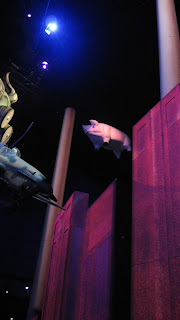 Today I visited the V&A Museum's Pink Floyd - Their Moral Remains exhibition and despite spending three hours in there, it wasn't really long enough.  The exhibition tells how the band started in the 1960s and continued for a further five decades.  Along with the music the exhibition tells the story of the art (album covers, programmes, stadium shows) and the people who put together what began as "Happenings" and became stadium experiences.

The inflatable pig (famous for escaping its tether when photographed above Battersea Power Station) was not on display but a smaller version above a set made you feel it was really high above you.  But I think the schoolmaster puppet was the real thing.  The two giant heads from the Division Bell were real - and huge.

And because I like to find the textiles in the exhibitions I visit, (if inflatables aren't textiley enough), they also had a pink man who seemed to have been sewn together. 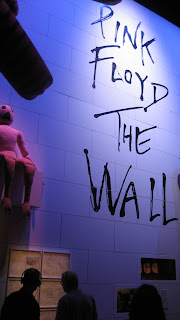 There was lots about the music (obviously) - including how the band added in sounds of ordinary objects along with early experiments in electronic technology.  I was particularly impressed with this drum set - which perhaps should be part of the British Museum's latest exhibition on Hokusai. 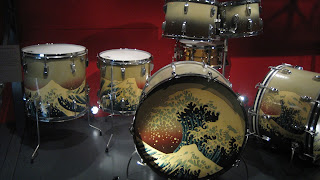 There was also lots about the art work - for the album covers but also for the concert programmes. 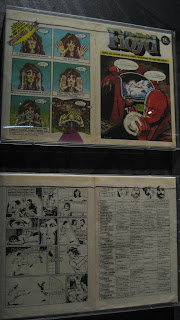 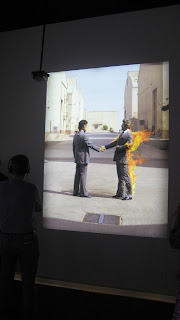 Interestingly too after years of visiting exhibitions where there is a "no photography" rule - this exhibition not only let you take photos but also use flash - unfortunately I did not realise until the very end that that was permissible which is why my images are rather dark.

Another element I really liked were the old fashioned telephone box - each one had a collection of books, imagery, words etc relevant to the different decades.  It set everything in context.

More than an exhibition this was an immersive experience and well worth the visit.  Even taking the time we did it was impossible to take in everything so we plan to go back, perhaps at the end of the summer if tickets are still available then.

Pink Floyd - Their Mortal Remains is on at the V&A Museum, London until 1 October 2017.