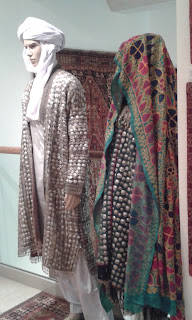 Embroidered Tales and Woven Dreams is a free exhibition at the Brunei Gallery at the School of Oriental and Asian Studies (SOAS), on until 25 March 2017.

Many of the people living on the Silk Road have had to move and resettle either for political or economic regions, but they took their traditions, in particular their textile skills, with them.  Passed down from mother to daughter, they are records of social customs and folk tales, but also representations of identity.  This is an exhibition that tells some of that history. 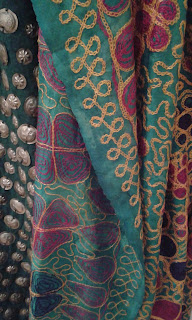 This embroidery (above) is apparently typical of Afghanistan but there are also pieces from areas bordering the Indus, Yemen, Turcoman, Sogdiana and the Near East.  There are some absolutely stunning Indian embroideries and some beautiful lengths of presumably silk cloth.  My time was limited so I only took a couple of photos (with permission), but I will definitely return for a much longer look. 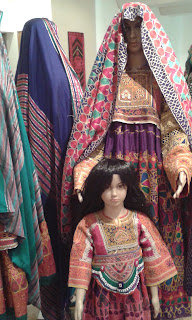 The Brunei Gallery is open Tuesday to Saturday 10.30am to 5pm (late nights on Thursdays until 8pm) but closed Sundays, Mondays and Bank Holidays.  It can be found in Thornhaugh Street, Russell Square, London, WC1H 0XG.  There are a number of (free) public lectures by some internationally renowned speakers - see the gallery website for details.