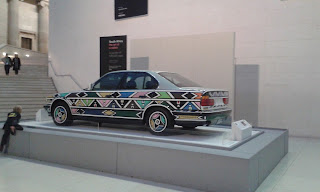 I have to admit, I visited South Africa: the art of a nation at the British Museum because I was between a meeting and an evening function in the Bloomsbury area, but it was an exhibition I had been meaning to visit.

The exhibition is, as the title suggests, about the art of South Africa, stretching back to some of the earliest art in existence, if not the earliest "found" object, up until the present day.  Amongst everything else there are several textile and many beaded pieces of modern art work.

The very first room includes some cave painting that dates back to 1-3,000 years old, juxtaposed with an art work from 2015 - an embroidered applique work.  Both from the same cultural group the textile piece is by the "First People Artists" from Bethesda Arts Centre and shows the Creation of the Sun.  So a modern work with an ancient legend.

In the next room was a piece of art I had only seen previously as a drawing - the Makapansgat Pebble dates back 3 million years.  It was surprisingly bigger than I expected.  Although naturally created it appears to have a human face on each side and it was originally discovered in an area different to where it originated.  It is thought to have been picked up because of its human like features - and there was me thinking Duchamp had "discovered" found art.

Throughout the exhibition there a great diversity of art works but also themes.  The works showed how the problems of colonialism, post-colonialism, HIV/AIDS and apartheid have all influenced South African culture.  This also included work that combined traditional techniques with contemporary themes - particularly in the beadwork of which there was a fair amount.  A wedding cape and train and a wedding blanket from the 1970-80s had patterns similar to those of the car (seen above), but it was particularly interesting to see a tie and collar in beadwork.  Forced to wear western clothing, this had been made in the spirit of dissidence.  There are also several beaded figures - traditional and modern in style.

One of the last art works, and one of the largest, was a work by Mary Sibande called A Reversed Retrogess: Scene 1 (2013).  Two life size figures stand twisted, opposite to each other - one representing the artist's mother and grandmother in an outfit similar to that worn by women in domestic service. However its full blue skirt and long train made it completely impractical as a working outfit.  The second figure in purple was much more fantastical in purple with additions and flounces of net.  Around this figure organic felted "creatures" are supposed to be a protective force. The purple colour refers to the 1989 Purple Rain protests when protesters turned the police water cannon back on the authorities - because the water in it was dyed purple, the police were covered with "purple rain".  Is this what Prince's song referred to?  For an image of this work and more information clinic HERE.  This links to an article by Apollo Magazine about the exhibition.

All in all an interesting and thought provoking exhibition - it continues until 26 February 2017.