Textiles - from really ancient to the latest trends 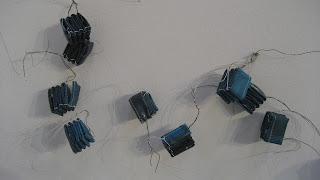 This was a week when I managed to see textiles, (especially embroidery), from two very different time periods - some dating from the late fourth to early third century BC; others from 2017.

The really ancient textiles were part of the British Museum's exhibition of the Scythians: Warriors of Ancient Siberia.  This was an exhibition that included everything from mummified remains, fabulous pieces of goldwork and even a bag for some really old cheese - so a pretty varied exhibition.

With no written language, these nomadic people are only known through the objects they left with their burials.  However because of the freezing temperatures of Siberia much that would not normally survive for such an ancient culture, has.  I had read there would be some textiles but had not realised how much there would be - or that there would be some really quite fine embroidery.

The early part of the exhibition focused on a large quantity of gold objects - these were in themselves quite remarkable.  The Scythians were keen on animal motifs and this was also reflected in some of the felt pieces on display - including a felt swan and a horse's headpiece resplendent with a goat and bird on top.  Another textile highlight was a shoe decorated with beads and metalwork.  There was also quite a lot of applique work and a really delicate piece of embroidery - now not much more than a collection of chain stitches in the shape of a winged horse.

Definitely an exhibition worth visiting if you have a love of ancient embroidery and/or felt work.  It continues until 14 January 2018.

Then yesterday I visited a very different exhibition showcaseing a whole range of contemporary textiles - the Knitting and Stitching Show at Alexandra Palace in London.  From beginners to accomplished artists everyone was catered for.  I had missed the show for two years running and so it was nice to get back to see some of the variety of work on display.

For me the highlights were the exhibitions - I particularly liked Studio 21's Sewing Machine Project, pieces of which are illustrated here.  This group used the sewing machine as their starting point - looking at it both for its aesthetic values (visual, aural and tactile) and its history (personal, cultural, political and social). 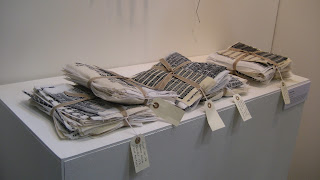 (Above) Amarjeet Nandhra looked at ideas of manufacturing and piece work
(also known as the bundle system) - The shirt on your back. 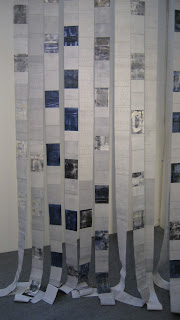 (Above) Mary Morris used monoprints based on her sketchbook drawings for this piece
called On Line. 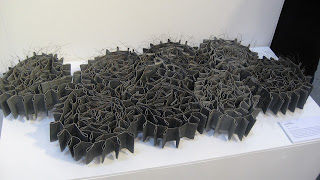 (Above) Debbie Lyddon's Fold used strips of fabric folded and "stitched" with wire to consider the relentless mechanical movement of the sewing machine.  This photo does not do Debbie's work justice and I strongly recommend a visit to her own website/blog.

I was also interested in the work of the group Hue who used as their starting point the text of Robert Macfarlane's book The Old Ways.  Macfarlane looked at pathways and landscapes shaped by ancient people and he worked with Hue as they made their textile pieces.  I thought this was a really interesting collaboration.  It is only recently I have learned about Macfarlane's work - first through Jenny Langley, in my own textile group EAST.  She had also been inspired by this author's work in our exhibition Following a Thread earlier this year.  In addition, next year Macfarlane's work will feature in an exhibition at the Foundling Museum.  I definitely need to put his books on my "to do" reading list.

Other highlights for me in the show included the work of Jo Beattie, Haf Weighton, Hilary Hollingworth, Lynda Monk and Diana Harrison.  As well as being inspired by some very talented artists, and do a bit of textile shopping, it was also nice to catch up with like minded friends.
Posted by Janette at 06:43