Two trips to The Tate 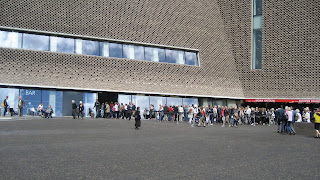 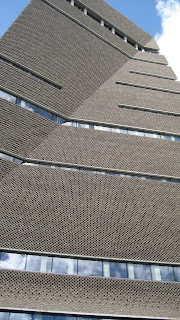 I have never had to queue to get into Tate Modern before, but yesterday was a very special day.  I was one of the lucky few (or should that read "lucky many") who were allowed in to the Members' Preview event before the public opening of the new Switch House.  The sun was shining, the queue moved quickly and there seemed to be a feeling of excitement as we waited our turn to get through the doors.

The building is very industrial in design but there are plenty of seats and space, particularly on the first level up where I found the new "Between Object and Architecture" gallery.  I was especially pleased to see a large number of works by women artists, and work I had not seen on display at the gallery before.  Throughout the Switch House there were also a lot of textile pieces.  On Level 3 I found the "Performer and Participant" gallery, the first piece of which was a display of Suzanne Lacey's The Crystal Quilt (1985-7), which includes a traditional patchwork quilt alongside images (still and film) of the performance work itself.  This floor also included a whole room of work by Rebecca Horn's body sculptures - exploring ideas of contact between individuals and their environment.  On Level 4, as well as the "Living Cities" gallery, there was an Artist Room dedicated to the later works of Louise Bourgeois, many of which are textile pieces.

Trying to take in the new building, the new art works, the new type of spaces for art (such as The Tanks) - it definitely needs more than one visit.  It was quite refreshing to go to the very top of the Switch House and its viewing gallery.  Not only was it a chance to get some fresh air, I was able to enjoy a new view over London. 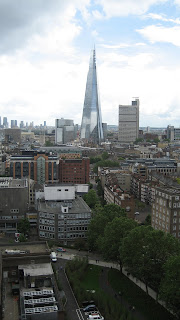 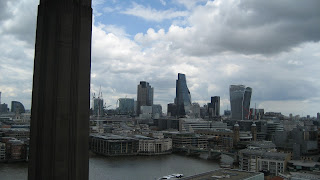 I was in fact very pleased that only a couple of weeks ago I had visited the "old" Tate Modern for the Mona Hatoum retrospective - it too has many elements of embroidery and weaving (though often using unusual materials such as hair or pasta).  Hatoum's work can be political but also very thought provoking and I had planned a second visit.  However I thought after walking from Liverpool Street Station, all the walking in the Switch House, all the up and down of the stairs, it would be better to return another day.  Particularly as when I last visited I also discovered that the Boiler House (what used to be the whole Tate Modern building) had been completely re-organised, so that too seems like a new set of galleries.

If there was a drawback to the day, it was the fact that due to the popularity of the event, I never got to try out the lifts - they were always full and there were always queues.  Oh my poor knees!