An EXCELlent week for textiles 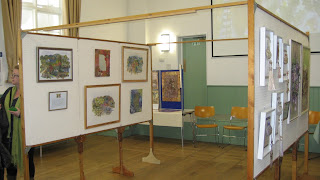 For centuries, embroidery has often been confused with "something women did to keep them occupied" - always the worry that idle hands might somehow be dangerous for the local community, the country, or even the world.  I am pleased to note that there are plenty of examples of stitching that not only enhance a community but also create new bonds of friendship, it could even be said making the world a better place.  There were two events I attended this week that illustrate this well.

The first event was assisting in the stewarding of a retrospective of an exhibition of work by friend and fellow EAST member who sadly died last year.  Delia Pusey's husband, with the support of his family, had put together a retrospective of her work (which continues until 9th April) at The Old Chapel, St Mary's Lane in Upminster, Essex (see above).  To see even just a small selection of someone's creative output, particularly someone as talented as Delia was a pleasure in itself, but it was even better to hear people's comments and see just how long some people were prepared to look, absorb, and take it all in - plenty of men and women.  The inclusion of Delia's sketchbooks and samples meant there was some explanation of the creative process from start to finish.  Importantly, more than one person said they were going home inspired to create something of their own.

Then today I took my mum to see the ICHF Stitching, Sewing and Hobbycraft Show at Excel in London.  There were a number of exhibitions and displays that showed textiles as historical documents, fund-raising items, and cultural exchanges, all of which recorded the impact textiles had and have in a variety of ways.

The first stand we stopped at was the Embroiderer's Guild, where we both sat down and added a tiny piece to the World's Longest Embroidery - as the attendant said, by doing so we were becoming a part of history.

The next stand we came across was The National Needlework Archive who document textiles around the UK.  They are particularly interested in textiles in public places and items belonging to organisations and Private collections available for study.  The Old Chapel Textile Centre, based in Newbury, hosts workshops, classes, conferences and events and are open Tuesday to Thursday, plus the first Saturday of the month.  One of their prized works is "The Country Wife" which was made for the Festival of Britain by Constance Howard (1951) and is currently under conservation. On display at the Excel Show was a display of embroidered birds by Carol Checketts - I particularly loved the heron and the starlings.  They were happy for the work to be photographed but hoped those doing so would make a donation for the RSPB - so by admiring embroidered birds, I could help real ones. 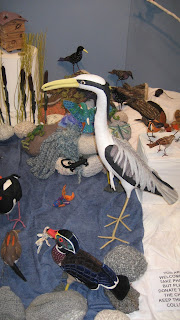 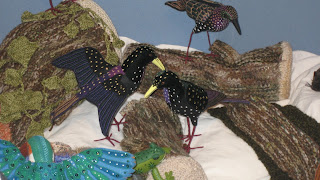 The next exhibition we came across was that by the Canadian Red Cross Quilt Research Group - a team dedicated to preserving the history of the quilts, and makers, made during the Second World War by Canadian women and sent to Britain for those in need.  Recipients included those bombed out of their homes but also Land Army Girls, hospital wards and forces personnel.  Often identified by an official label with the Red Cross emblem and "Gift of Canadian Society" they are hoping to hear from anyone who knows of such items or stories relating to them.

The quilt below is an example of one that was stitched with names - each person paying to have their name embroidered on the quilt.  The quilts were then raffled and helped fund the creation and distribution of other quilts when needed. 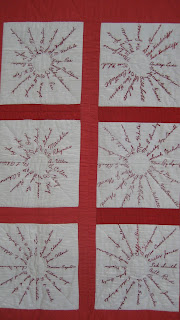 The last exhibit that we were particularly taken with was the "Forest for Ever" display created by an organisation supporting embroiderers in Afghanistan.  The particular pieces on display had started out with a request for embroidered leaves (ie, leaf shaped, hand stitched, decorative pieces), which were then sold in Europe to be incorporated in a larger work - of which there was a wide variety.  It is a German-Afghan initiative and appears to be just part of a much larger, ongoing project.  For more information (including a section on traditional Afghan stitching techniques) visit the Guldusi website. (NB:  "Gul" means "flower" and "dusi" means embroidery in Farsi and Paschto - the two official languages of Afghanistan) 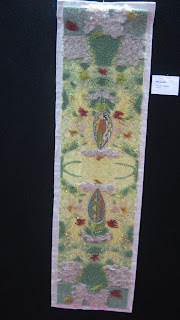 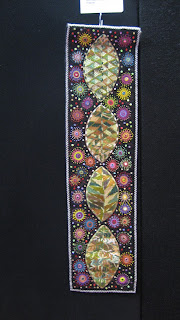 These pieces (above) show leaves embroidered in Afghanistan incorporated into work by European stitchers.

My mum chose to purchase a rather tasteful piece (below) which she thinks she will put into a cushion. 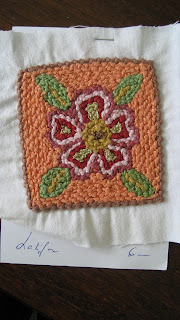 I on the other hand picked what, after some discussion, we decided might be a cat sitting by a stream, but a rather sad one.  Worried that no one would buy him with his frowning face and odd shape, I decided I could not leave him to pick one of the prettier pieces.  He might just hang on my wall but I would like to think that some day I might incorporate him into a larger work - it might cheer him up!

Now I have to think of a name for him - any ideas? 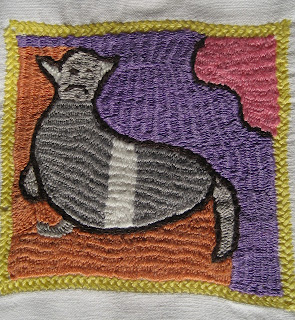