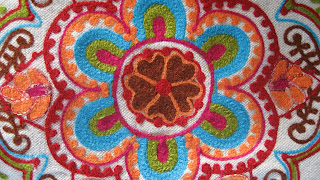 Think of Egypt and you tend to think of mummies, pyramids, hieroglyphs, etc, but the British Museum exhibition, Egypt: Faith After the Pharaohs, looked at the history and culture of the country from the time when the Pharaohs had lost their power to the Romans.  From belief in multiple gods many people were converted to the idea of one through the religions of Judaism, Christianity and Islam.  In the early centuries AD, people of different faiths generally lived side by side, tolerant of their diversity and often influenced by their differences.

Because of the climate and geological conditions in Egypt, textiles survive in abundance, allowing them to be part of the evidence of life almost 2000 years ago.  Very early on in the exhibition there was a child's linen tunic dating from the 6-7th centuries AD.

One of the most elaborate textile artefacts of the exhibition was a set of tomb curtains, again dating from the 6-7th century AD.  They were brightly coloured with a border of cartoon like cherubs holding swags and baskets of fruit between them.  With the curtains pulled together two angels held a plaque which was badly worn, but showed a cross in the centre.  The plainer areas were dotted with birds, flowers and fruit.  Apparently the curtains survival was due to their reuse as a burial shroud.

The exhibition also included one of the oldest known embroidered Islamic cloths - the Marwan tiraz (inscribed textile).  This ceremonial cloth dates from 684-750AD (or 64-133AH).

Another favourite piece from the exhibition were some fragments of tunic decorations, that included nilometers, ie instruments for measuring the height of the Nile water.  The fragment showed God holding a cornucopia and his companion Euthenia holding a veil filled with fruit.  One cupid figure holds a bird while another engraves the figures IZ (17) and IH (18) indicating the ideal height of the Nile (too much meant flood, too little drought).

Although not textile related, I also found the section on the Cairo Genizah collection interesting. This is a collection of hundreds of thousands of literary texts abandoned in Ben Ezra Synagogue in Old Cairo.  It gives a remarkable insight into the social and economic life of medieval people living in Egypt and includes personal letters alongside literary works. Two Scottish scholars (twins Agnes Lewis and Margaret Gibson) brought back some of the fragments to their friend, Solomon Schechter in 1896.  He recognised their importance and brought back 193,000 manuscripts back to Cambridge -scholars are still studying them today.

The exhibition had begun with three texts (one Jewish, one Christian and one Islamic).  It ended with three tunics, each different but with decoration that does not allow them to be identified as from any particular culture - similarities and diversity, altogether.

I visited this exhibition in its last days.  I had not expected there to be so many textile items on display and as they come from a range of museums (British Museum, Victoria and Albert and the Louvre), I was lucky to see them altogether.  My timing also meant that the exhibition shop was selling items at very discounted prices - the image at the top of this post is that of an embroidered bag, made in modern Egypt.  The British Museum's next major exhibition on Sicily (opens April) also promises some textiles so it looks as if I will have to go back there again in the spring.