Judith - a woman of violence and virtue

I love catch up TV and the other day I re-watched a programme on Artemisia Gentileschi - a 17th century artist of great talent who worked at a time when being a woman made it a difficult career choice.  I did know a little about her before the programme, but I did recognise some of the art works. It was an interesting programme about what is known about her life, which I wish I had known before my recent trip to Rome.  I was particularly surprised to see that the church (Santo Spirito in Sassia), where she married.  It was one of the churches I had sought out because of its intact foundling wheel. 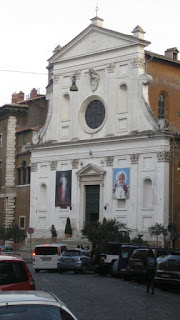 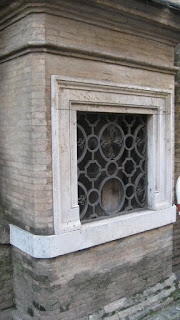 One of Artemesia's most famous paintings might seem rather surprising for a woman of her time - an image of "Judith Slaying Holofernes".  It is rather graphic, but immensely powerful - and I have only seen it in reproduction.

A very simplified version of the story is that the virtuous widow Judith plans to overcome General Holofernes who is attacking her home city of Bethulia.  The beautiful Judith, dressed in her finery, visit the General's tent.  While he is overcome with drink, she calmly cuts his head off, and carries it home.

Surprisingly it was a very popular subject for embroidery and other needlework items in the seventeenth century.  The Fitzwilliam Museum in Cambridge has a version as a whitework sampler  (click here) and there also exists a needlework panel belonging in the Burrell Collection in Glasgow (click here).  Sometimes Judith is shown with her female servant and often she is holding the head in her hand.

Judith was one of several biblical heroines who allowed women the opportunity to send a message of political protest while pursuing what was then considered a rather genteel art.