When I went to help out at a Wild Food and Chilli Fair last weekend, the last thing I expected to do was to discover a "fabric" I had never heard of before.  In particular I did not expect to find out about it on a stall dealing with food foraging and another on bushcraft.  But here I learnt about amadou. 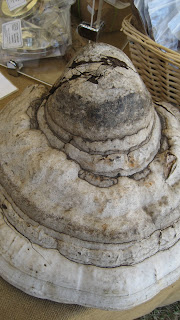 Amadou is a soft spongy substance that is found in the bracket fungus (see above).  This piece was probably about a foot or more (30cm+) in diameter, and at the back you could see where it had once been attached to a tree.  The fungus is also known as horse's hoof fungus (which seems obvious when you see its shape), or tinder fungus (a name that references once of its many uses).

It is apparently used by fly fisherman to dry artificial flies.  It is also used for starting fires with flint and steel (of which I was treated to a demonstration) and why Otzi the iceman (who died 5,000 years ago and preserved in ice), had some about his person when he was discovered in the 20th century.

However it can also be used as a fabric.  A sample on the bushcraft stall had been made into a cap, and it felt like a piece of suede leather; but a vegetarian version.  Really soft and not at all like a fungus. 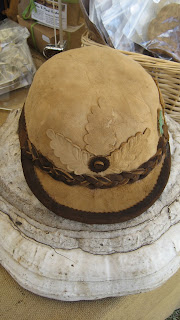 It made me wonder what other strange fabrics come from nature, not including the obvious (ie, cotton, flax, silk, wool etc).  Nettles of course make very good fibres (they were making fibres from it at the show, although I missed this demo), but I wonder if there are any other unusual sources?