All in the best possible taste 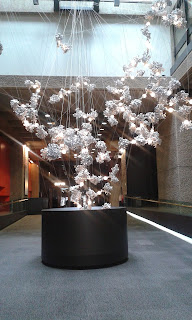 After more than a month without getting to see any major London exhibitions, this week two came along at once.  Yesterday I went to the amazing Abstract Expressionism at the Royal Academy which was quite exhausting.  A couple of years ago before I knew anything about art history, I might wandered around confused, but this was just the perfect timing having just finished a year studying 20th century art.  Like many art works, no image can take the place of the real thing, and I can see now why Mark Rothko, Jackson Pollock and Clifford Still (and many others) have such a following. However, as this is a textile themed blog and there was absolutely nothing specifically textile related about this these works, I will move on to the exhibition I saw on Thursday.

With a title of The Vulgar: Fashion Redefined, currently showing at The Barbican, you might think that this was going to be an exhibition of really bad fashion.  Instead, as the display clearly explained, to understand what is vulgar you also need to understand what is tasteful so here was plenty of both. In fact it might be difficult to assess what was vulgar as much depends on who you are and when you lived that allows you to decide what is vulgar and what is not.  Even some of the outfits that I might have put into the "vulgar" category on first sight, I had to admire for the exquisite detail, much of it embroidery.

The word vulgar has had many meanings, and originally it was more about something common and ordinary than something ostentatious and showy.  So is being vulgar something that is trying to be something it isn't - a copy?  Something glitzy or provocative?  Something extravagant and out of place?

Amongst the pieces on show there was some exquisite lace, 18th century court gowns, historic stomachers and Viennese "golden bonnets" from Wien Museum, Vienna, dating from 1798-1810, so even if you were just interested in historic fashion there was plenty to see.  There was also plenty of twentieth and 21st century high fashion, including some made from denim (a vulgar fabric?) and a dress made of pencils.  The range of fashion styles on show meant there was much to admire and even some pieces to make you almost laugh out loud - although perhaps that would be acting in a rather vulgar way?

In conclusion, I thought this a very thought provoking exhibition.  It was also definitely worth sitting and watching the recorded interviews of fashion designers answering the question "what is vulgar?"  I came out seeing the world in a new light.

Unfortunately as I can not post any images of either of these exhibitions, I have added an image of Omer Arbel's 44, which is currently installed in the Barbican foyer (until 18 April 2017).